Recent set photos from Man of Steel give us a look at Henry Cavill, bedraggled and be-beard-eld, leading many to speculate that Steel‘s Clark Kent is going to be spending healthy chunk of his movie searching for the meaning in his life and super-life. And we could have joined in on the speculation but instead we found ourselves thinking wistfully of all the other times Superman has had a beard and giggling in a way most unbecoming. 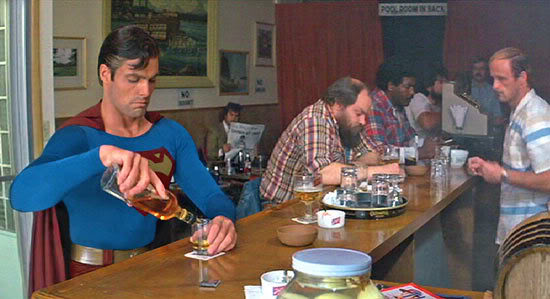 Lets start with the least of the beards: the five-o’clock-shadow that Christopher Reeve sported in Superman III, under the corrupting and depressive effects of red kryptonite. (You will be shocked to note that red kryptonite, known purely for having unpredictable effects on Superman, only features in two of these six beards.) This beard sends the message that the easiest way to tell if a guy is evil is if he hasn’t shaved in, oh, ten hours.

Of course if he’s not evil at the time and therefore can’t grow a five-o’clock-shadow on demand, Superman can still be quite resourceful. These panels are from an issue where Perry White, Jimmy Olsen, and Clark Kent have all swallowed a chemical potion that makes beards grow very rapidly. Obviously since chemicals don’t work on him, Clark must fashion a beard from his jacket to protect his secret identity. 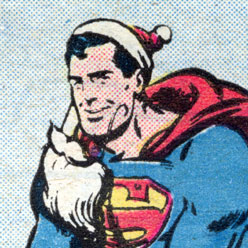 This attempt at making a realistic fake beard seems more half-hearted, but you might be surprised to know how difficult it is to find a picture of Superman dressed as Santa with a beard. But no worries, there’s this dystopian-future-Santa-hobo-bearded-Superman from a “gritty” 90’s oneshot where a future Superman fights twin clones of Hitler with a giant gun. See Cracked for the rest of that story. 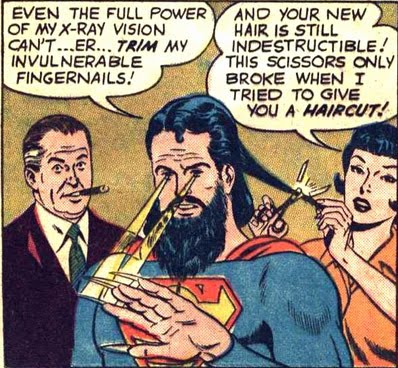 “But you mentioned red kryptonite!” you yell. Yes. Yes I did. The above picture is the product of red kryptonite. To get rid of his indesctructable hair, Superman whistles for Krypto (and Supergirl; kinda creepy) and they use their laser vision to get rid of it before anyone can say “Hey! Clark grew a beard and ponytail, too!”

But any fan of the DC Animated Universe can tell you that Superman coud have just done it himself with a mirror: 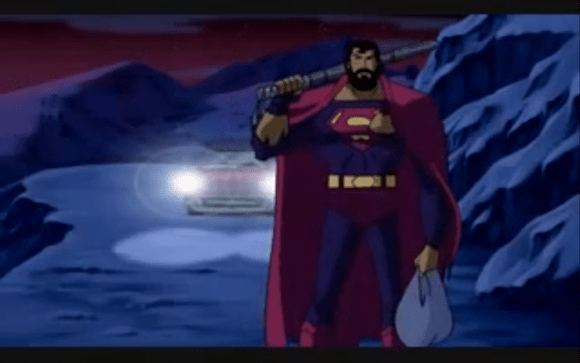 But my all-time-favorite Superman Beard has to be from the Justice League Unlimited episode Hereafter, in which Superman and a few pieces of an urban city block get stranded on a strange planet (it turns out to be Earth in the future) with a red sun. Superman loses his powers so he drives around in a car for a while, and if you think you’ve seen funny you haven’t seen a fully costumed Superman driving a car through a desolate wasteland.

He also grows an awesome Castaway beard. And makes himself a sword out of a large pipe over a forge made from road flares, but, after making himself a usable blade, apparently decides to keep the beard. Then he fights some horrible future-wolves. 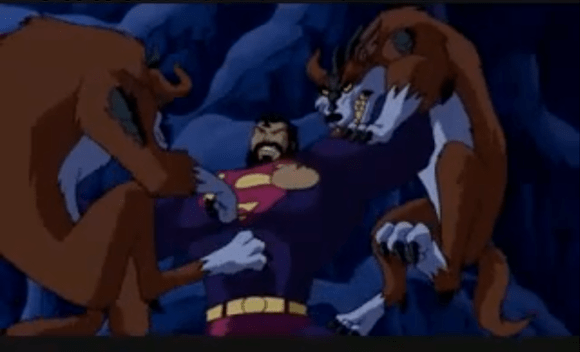 He kills their packleader and then turns to the camera, saying “Bear Grylls, eat your heart out,” just before he makes a coat out of the dead future-wolf and lashes the rest of the pack to a sleigh that he just made and rides them around the post apocalyptic wasteland because he finally ran out of gas.

The only part of that sentence that wasn’t true was the bit about Bear Grylls.