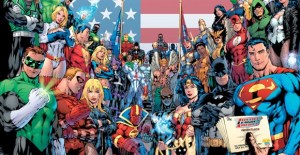 The infographic originally came to my attention when director Lexi Alexander (a real-life superhero in more ways than one) tweeted it from her account yesterday along with the caption “Hollywood diversity”. Created by a site called Pokies.net.au, it lists a lot of the superheroes (Marvel and DC alike) who have been portrayed in any medium–as well as the actors who have either played them in film and television or voiced them in a radio serial or animated series. If you look at the whole thing below (you can also click on the image to view it in a high-res version), one glaring trend emerges:

Yep, that’s unfortunately not a lot of diversity there–with some small exceptions, of course, like Eartha Kitt’s Catwoman, or Michael B. Jordan’s Human Torch, or every actress who has played Storm because canonically she’s a character of color. We’ll also be getting a small change in the line-up of actors who have portrayed Aquaman thanks to Jason Momoa’s recent casting. But the big, big majority of these characters have been predominantly white for almost 75 years (the infographic spans a period from the year 1943 to 2016, with the latest being Batman V Superman).

Now, it’s one thing to say diversity is happening in the comics cinematic universes because new and diverse characters are being brought in–but on the whole, actors of color are really only being brought in to play characters who, well, aren’t white (like Chadwick Boseman as Black Panther). Here’s a thought: what if the movies decided to be a little more colorblind in their casting decisions? Granted, there are lots of superheroes who have been portrayed on-screen who aren’t listed above, but there are also many, many more characters not included who haven’t yet made an appearance in a film or TV show. There are actors of color who can very capably bring characters to life who were previously white in the source material. We’ve seen it happen already in TV shows like Supergirl and Jessica Jones–Jimmy Olsen and Malcolm are two examples where a decision to change a character’s race has certainly not had a negative impact on anything whatsoever. (If anything, I can think of lots of reasons why I do not object at all to Supergirl‘s James Olsen. Ahem.)

We’ve got plenty of superhero movies coming down the pipeline in the years ahead–Wonder Woman is getting her own film, as are Black Panther, Aquaman and The Flash–so I have to believe that these small changes we’ve been getting on television are only the first of many. Progress doesn’t happen overnight, but I hope it’s not out of the realm of possibility that we’d get to see a superhero, maybe even one of the big names, played by someone other than a white guy. It’s sad that it’s taken us almost 75 years and diversity and representation still have to be demanded and championed for when it comes to who gets cast as a superhero. And hopefully, a few more years down the line, that infographic will start to look a little different.