Yes, I still blast 'Fight Song' with the windows down, why do you ask? 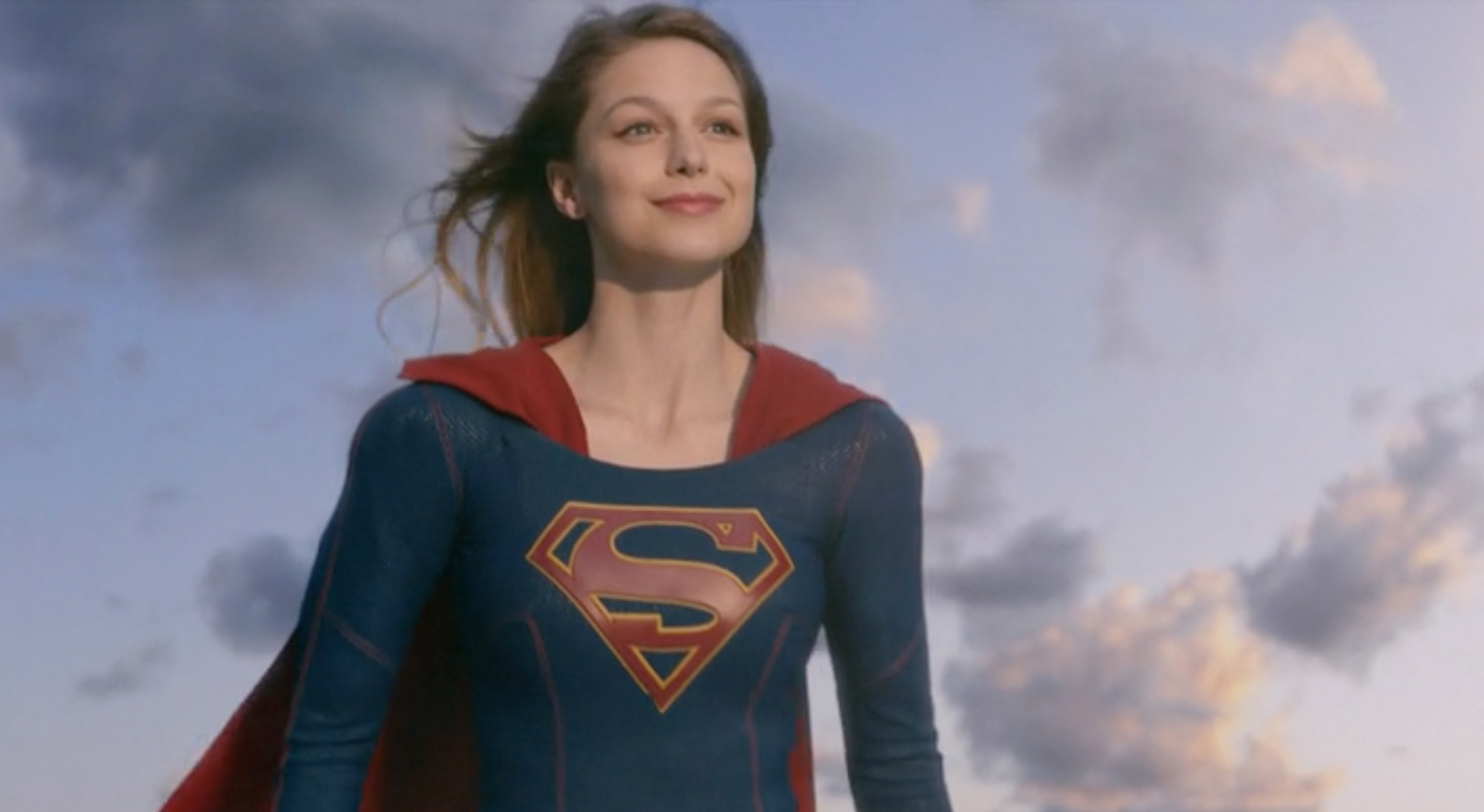 It started like a creative writing prompt in a geek culture class: What if Superman had landed on Earth as a knobbly-kneed 12-year-old instead of as an infant? What if the spaceship carrying the survivor of Krypton’s apocalypse made an unscheduled pit stop in the ominous Phantom Zone on its way to planet Earth, delaying its arrival? What if the passenger in this escape pod were sent to watch over the superhero now known as the Man of Steel— and what if said character were a girl?

Supergirl: not a bird, nor a plane, nor a man. This latest iteration of Kara Zor-El is a feminist force to be reckoned with, a long-overdue female role model within a mainstream market saturated with masculinity. She is also a shining example of a particular aspect of femininity that is all-too-often looked down upon. She is unapologetically “girly” in a culture that still views that term as an implicit insult.

Midway through the Supergirl pilot, Kara bursts into Cat Grant’s office in a huff and protests her boss’s use of the term “Supergirl,” preferring the bolder connotation of “Superwoman.” Grant, played to steely perfection by Calista Flockhart, fixes our young heroine with a stare and asks: “What do you think is bad about ‘girl?’ I’m a girl, and your boss, and powerful, and rich, and hot, and smart. So if you perceive Supergirl as anything less than excellent, isn’t the real problem… you?”

This mini-manifesto was featured in the six minutes of footage released by CBS over the summer, and I’ve been meditating on it for a while now. Having seen the rest of the pilot and fawned over its gloriously unsubtle female empowerment huzzahs, I feel even giddier about what this show is unashamedly trying to accomplish.

Just like her comic book counterpart, CBS’s Supergirl (premiering tonight) can be viewed as the inevitable byproduct of an age of superhero mania. Which, of course, it is. But Supergirl is also DC Comics’ first female-led television series since since Lynda Carter’s Wonder Woman campaign in 1975; in other words, you could take a page out of the Bible’s book and wander around the Sinai Desert for 40 years, and only then would you encounter another DC-backed show with a female lead.

Enter Supergirl, aka Kara Zor-El. Born on the page in 1959 as a younger, wholesome, alt-gendered Superman, she then underwent supercharged growing pains, paradoxically becoming both more sexualized and more radically feminist, according to writer and former DC editor Valerie D’Orazio. Speaking to me via email, D’Orazio explained:

By the late 1960s, more ‘women’s liberation’ storylines were worked in, where characters like Supergirl, Batgirl, Wonder Woman and Black Widow took more of an active, ‘I don’t need men to tell me what to do’ role. Ironically, while this was going on, there was also more freedom to draw sexualized content in the comics industry.

The CBS show begins with Superman taking his newly arrived cousin by the hand and leading her to the benevolent Danvers family, who agree to raise her as their own and imbue her with the good ol’ Midwestern values that defined Superman’s own upbringing. But Kara’s comic book origin story is decidedly more disturbing than the one that plays out on the small screen.

Living Between Wednesdays blogger Rachelle Goguen pinpoints Action Comics #252, in which Supergirl debuts, as one of her favorite issues because “it is crazy how oppressive and selfish Superman is in it.” Temporarily defying his squeaky clean image as America’s Big Blue Boyscout, Superman welcomes his cousin to his adopted planet by depositing her in an orphanage and telling her to hide her powers and wear a wig. Don’t ask, don’t tell.

“That was basically Supergirl’s deal in the comics for a long time,” Goguen tells me. “Superman is Earth’s greatest hero, and Supergirl lives in an orphanage and only uses her powers in secret. It’s a pretty clear reflection of the approved roles for men and for women at that time.”

The different experiences of Supergirl and Superman highlight the contrasting treatment of different genders precisely because everything else about them is exactly the same: the superstrength, the x-ray vision, the ability to fly, etc. The only difference is that one is male and one is female— but that difference has, in past iterations, made all the difference.

So, where does the CBS version of the Girl of Steel fit in?

Women have historically had a rough go of it in the comic book industry, both as characters and as writers, and D’Orazio believes that this new Supergirl is partly an attempt to gather the masses of female fans who may never have flipped through a comic book but worship at the altars of colossal fandoms such as Star Wars, Star Trek, Doctor Who, Lord of the Rings, and others. “If the comic books themselves can’t stay relevant and diverse,” D’Orazio muses, “maybe it’s up to movies and TV.”

Supergirl is uniquely poised to deliver as a girl-power reclamation story starring a well-written, well-rounded, and real-sounding woman, and this woman is the result of a collaboration between a multi-gendered group of individuals. The series is produced by two men (Greg Berlanti and Andrew Kreisberg of The Flash) and two women (Ali Adler and Sarah Schechter), and Adler reveals that the writer’s room is also evenly split. The team behind Supergirl has repeatedly insisted— via interviews and marketing campaigns— that this is a show meant to empower women and girls, to depict a real human woman as the protagonist and to explore the world through her eyes, not through a man’s— Super or otherwise.

That is not to say that Supergirl turns a blind eye to the everyday sexism faced by Earthling women; rather, the show addresses overt and covert sexism with a laser-beamed gaze. At one point during the pilot episode Kara is told, “You wanna help? Go back to getting someone’s coffee,” and the villain-of-the-week smacktalks her by growling, “On my planet, women bow before men!” The responses of the women in the show, notably Kara and her adopted sister, Alex Danvers, are swift as a speeding bullet, though also as subtle as lead. When one character insists that Supergirl isn’t strong enough to battle the baddie, Alex retorts, “Why, because she’s just a girl?”

These interplays may seem a bit heavy-handed until you think of all the nine-year-old girls who will watch this show and will absorb Girl Power messages that would otherwise be lost in the hazy world of adult nuance. You might harden your heart against black-and-white simplicity, until you see pictures like this, and you realize the good that Supergirl can do by boldly and proudly fighting like a girl, for girls.

Supergirl is a buoyant, hopeful show, just like the other superhero hit helmed by Berlanti and Kreisberg— CW’s The Flash. Like The Flash, Supergirl boldly wears its heart on its sleeve. If the pilot episode of Supergirl is any indication, Melissa Benoist’s Kara will face hardships just like Grant Gustin’s Barry Allen: with open-hearted determination and all-around, honest-to-god goodness. And also oodles of totally relatable dorkiness, because we’re all awkward and confused twentysomethings at heart. Or in real life.

That unironic optimism is in itself breath of fresh air within the “gritty” smog that envelops trending superhero tales like Gotham (FOX) and Daredevil (Netflix), which angstily wade around in a cesspool of moral greyness in the pursuit of Realness. But Supergirl pushes boundaries too, again taking its cue from The Flash. Over in Central City, Barry Allen is bestowed with superspeed and healing powers, yet he is also highly emotional. He doubts himself and he gets emotional, and this doesn’t take away from his value.

Supergirl promotes this same message in a delightful way, challenging stereotypes of gender norms in a way that extends a hand to fans who identify with all genders. When the trailer footage was released, some dopes complained that it made the show seem “too girly” because Kara, I dunno, squealed when she saw herself on television. (Or because it felt tonally similar to a certain Black Widow SNL sketch.) But Kara’s boss lays down the law with her “I’m a girl” speech, insisting that “too girly” is not a concern worthy of note. Valerie D’Orazio agrees with this sentiment and scoffs: “As if it’s a crazy concept that a show called “Supergirl” would appeal to actual girls.”

Supergirl is all about Girl Power, but it is also, crucially, about Girly Power. Female action heroes have risen to popularity by embodying classically male characteristics, just as female executives have risen to power by…well, also acting like men. Annie Oakley’s playful “anything you can do, I can do better” quip comes to mind, but the unavoidable implication of that ditty is that masculinity is society’s default ideal— he is the point of comparison, he is the spectre of Superman that looms over the image of the female version of him that shares his name and crest. Men have a hell of head start; to keep up, the women of the world have to pull a Ginger Rogers and do everything that men do, but also backwards and in heels.

The rise of the female action hero in Hollywood is a wonderful thing, and I certainly don’t want to undermine the importance of the Katnisses and the Furiosas of the industry in terms of empowerment among men. But when the message becomes Hey girls, you, too, can be…just like boys!, the implication is that femininity— comprising sugar, spice and everything nice, of course— must necessarily be suppressed for success. Supergirl overturns that poisonous gender imbalance. Supergirl is dedicated to embracing femininity in all its shapes and forms.

As Barbara Gordon (aka Batgirl) once said in reference to her friend Kara: “A hero is not measured by what her power may be, but by the courage she shows in living, and the warmth she holds in her heart.”

Bulletproof she may be, but Supergirl is no paragon of machismo strength. For the sake of all the little girls who dream of different ways to fly, I wouldn’t have it any other way.

Allyson Gronowitz (@AllysonGrono) is an entertainment writer living in LA, still anxiously awaiting her Hogwarts letter. She is the resident geek culture writer for Ampersand LA, as she pursues her master’s degree in Arts Journalism from USC Annenberg. Allyson has previously written for Bustle, and can also be found ranting about Doctor Who, women’s hockey, and movies on her blog. She watches too much TV and would love to tell you all about it.