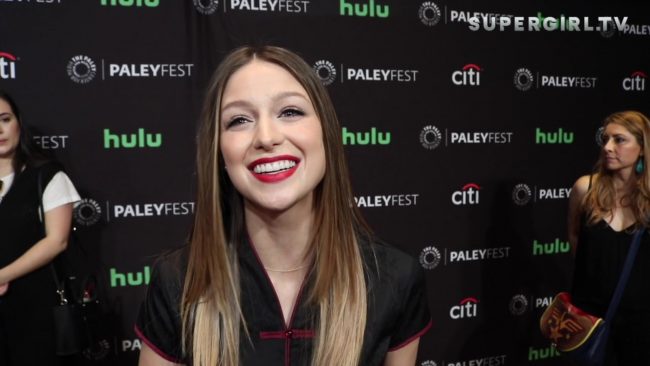 It’s a big week for Supergirl fans! Not only is there an all-new episode tonight on The CW, but tomorrow night is the highly-anticipated musical crossover episode between it and The Flash! If you were in Los Angeles this weekend, you may have been lucky enough to snag seats for PaleyFest L.A. where, among other panels, there was a CW panel featuring Supergirl and the rest of our favorite DC shows!

Supergirl‘s Melissa Benoist and David Harewood took part in a huge panel called “CW’s Heroes & Aliens: Featuring Arrow, The Flash, Supergirl, and DC’s Legends of Tomorrow,” which was moderated by Kevin Smith, who’s directed episodes of both The Flash and Supergirl. Before the panel, the folks at Supergirl.TV interviewed Benoist and Harewood, as well as some of the cast members and writers from the other DC shows on the PaleyFest red carpet.

Benoist talks about the fact that it isn’t difficult to get to the more emotional places when acting opposite co-star Chyler Leigh, “because there is a real sisterhood there, and we really do deeply care about each other. She means so much to me. She’s a sister from another mister. So there’s not a lot of preparation. We kind of know how to get each other to that place, and let each other feel what we need to feel.”

Meanwhile, Harewood was asked if there’s anything he’d like to see J’onn J’onzz do in coming seasons, especially since the character tends to be a lot more powerful in comics than he seems to have been allowed to be on Supergirl. “I’ve gotta be honest, it has frustrating,” he said. “Because he is, in the comic books, an incredibly powerful character, and I seem to keep getting my butt kicked. [laughs] So, I’ve had to just put the comic books down and get on with what I have to do.”

Sadly, I was unable to attend The CW’s panel at PaleyFest, but the festival goes on through this week, and I will be attending both the red carpet and panel for Orphan Black to get the scoop on that show’s final season, as well as the first-ever PaleyFest panel for HBO’s Westworld! So, make sure you check in with The Mary Sue on Friday for interviews and insights on Orphan Black, and next week for Westworld coverage!