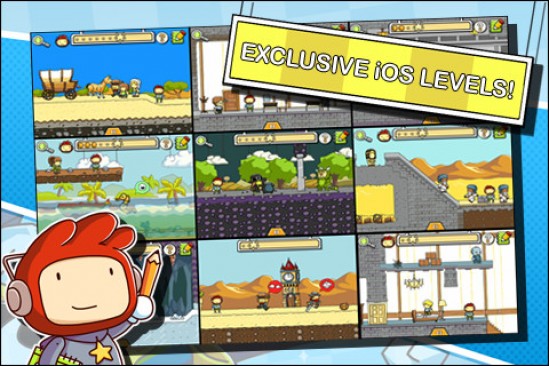 For the uninitiated, Scribblenauts and its sequel Super Scribblenauts both released on the Nintendo DS once upon a time, and provided a unique gameplay experience in which the player has access to a magical dictionary that can summon objects of words that he or she enters, then use said objects to solve each level’s puzzles with the ultimate goal of collecting a level’s star. The first Scribblenauts restricted the allowable words to nouns, while Super Scribblenauts added adjectives, so one could summon a “gentlemanly velociraptor,” which would then appear wearing a top hat. The games are very fun, even though both had their flaws — anyone who played will remember the first game’s levels being easily solvable most of the time with the simple use of some rope and a jetpack.

Owners of iOS devices can now join in on the fun, summoning “gentlemanly vampires” to fight “ridiculous God” (a thing you can do in Super) or trying to see what words the dictionary doesn’t recognize (generally what everyone does for the first few days), for only five bucks, with Scribblenauts Remix. The iOS game seems to be a mashup of both the original Scribble and Super, taking the best levels from both, while including Super’s adjectives, and will also come with some exclusive iOS levels that no one will ever play because they’ll be too busy seeing if a “shy octopus” can fly a “tiny blimp.” The game is out right now, so get to it.