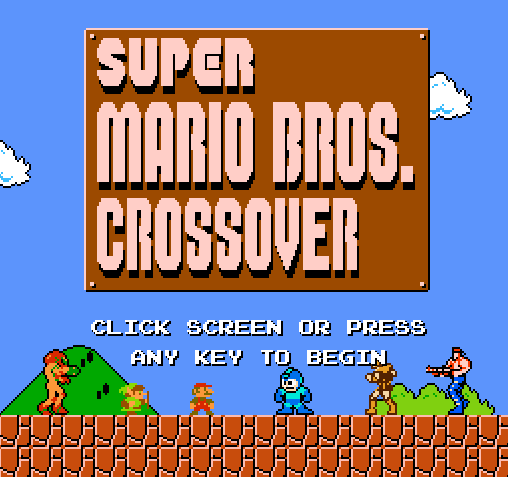 While it may not pass Roger Ebert’s muster, anyone who has played a video game since the dawn of Pong will be hard-pressed not to call Exploding Rabbit‘s Jay Pavlina’s flash game Super Mario Bros. Crossover a work of art. The game allows the player to play the entirety of the classic Super Mario Bros., but do so using some of the greatest characters in video game history as well as the mustachioed plumber. The ridiculous thrill one gets when using a warp pipe while playing as Mega Man, Samus, Link, [Contra‘s] Bill R., or [Castlevania‘s] Simon has to be felt to be believed. Pardon the hyperbole, but it’s true. Fortunately, Pavlina has been nice enough to allow us to embed an updated version of his baby so you can play it right here. Take a turn at it after the jump!

The thing that’s amazing about SMBC is that it’s not just a simple sprite-switch. Pavlina took a year changing everything to be specific to each character. The music changes. The jumping mechanics change. The weapons change. The weapons change again for each power up you get. Mega Man can slide. Samus can roll. Simon can whip Koopas, for God’s sake! Half of the fun is seeing the little tweaks each character has and how they completely change the playing experience. There’s something so incredibly nerdy and awesome about the excitement one gets when Mega Man gets his first mushroom and suddenly has his helmet. (And can charge his shots.)

Pavlina has correctly anticipated that half of the fun here is exploration with each character. After every level, you get to go back to the character select screen. You’ll probably spend most of your first playthrough furiously switching from character to character because, after you see what happens when Simon gets flower power, you can’t wait to see what happens when Link gets it! 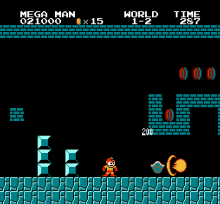 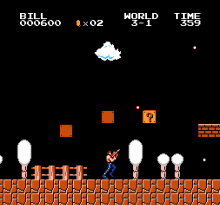 We really could write a novel about how much fun this is, but really you just need to try it. We had a hard enough time breaking away from it to write this article. Thanks again to Pavlina for letting us host the game and, of course, for making it in the first place. After giving SMBC a good try, make sure to check out the website for his company, Exploding Rabbit: The site just launched with the launch of Crossover, and says “There will be more content very soon.”