Massive Solar Tornadoes Are Larger Than Earth | The Mary Sue

The Sun Has Massive, Fiery Tornadoes Several Times the Size of the Earth 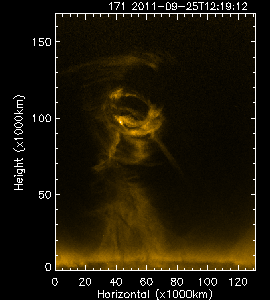 Imagine, if you will, a vicious tornado. Now imagine it’s made out of fire. Now imagine that it’s several times the size of Earth. Finally, that it’s in space. Allow me the great pleasure of informing you that what you just imagine exists on the Sun. That’s right, there are mammoth fire tornadoes on the sun, enormous, flaming sun tornadoes. These absurd solar windstorms were spotted by some researchers in the UK using the Atmospheric Imaging Assembly telescope mounted on the Solar Dynamic Observatory (SDO) satellite. Somewhere, Micheal Bay is kicking himself for not coming up with sun tornadoes on his own.

It’s one thing to know they exist, it’s another thing completely to have them on film. They have them on film. The footage is slated to be presented at the National Astronomy Meeting 2012 in Manchester today; some scientists are in for a real treat. Aside from plain old footage, scientists have also collected some impressive stats about the solar behemoths. The tornadoes are comprised of superheated gasses that range in temperature from 50,000 to 2,000,000 degrees Kelvin, can travel around 125,000 miles across the Sun’s surface over the course of 3 hours or so and reach speeds over 180,000 mph, roughly 1,800 times higher than any tornado here on Earth.

Clearly, these are incredible forces of nature, ones that really teeter on the line between “amazingly epic” and “completely unfathomable,” but either way, they sure are real. If this doesn’t convince you that we should be spending more time, money, and energy exploring space and its incredible secrets, I don’t know what will.