Summit Goes After Artist For Twilight Infringement | The Mary Sue 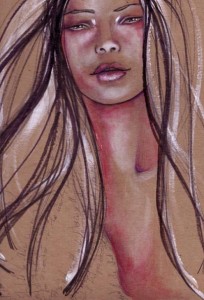 Take a look at this picture to the left. What does it remind you of? Anything? Or is it just a sketch of a woman with pretty hair? This piece of work by artist Kelly Howlett is actually the latter. It has no real title, except for the date “11-20-09.” If that date sounds familiar to you because you are a die-hard fan of The Twilight Saga, it’s because that is the same date that New Moon was released. You are probably still wondering what we’re writing about here, because this seems like these two things — Howlett’s sketch and Twilight — have nothing to do with each other. Well, Summit Entertainment, which owns all rights to The Twilight Saga, thinks it has enough to do with Twilight to warrant an email to Zazzle, where the sketch was being sold, claiming “infringement.” We’ll remind you: This sketch has nothing to do with Twilight.

We will issue a small spoiler so you don’t have to waste any time being annoyed or even outraged: Zazzle has restored Howlett’s sketch to its marketplace — using the same “11-20-09” search tag that got it flagged — and right after it was pulled, Howlett was able to sell it on another site.

Now, back to the story at hand: Summit Entertainment going after an artist for “ripping off” Twilight even though her work has nothing to do with Twilight. Here is how this went down:

Howlett received an email from Zazzle, which said that her sketch was being pulled from the marketplace because it contained “an image or text that may infringe on intellectual property rights.” Confused, because she couldn’t think of what her original sketch could be infringing upon, she contacted Zazzle to get to the bottom of this, and they gave her the complete story:

“I was told, ‘Your product has been removed from Zazzle’s Marketplace due to an infringement claim by Summit Entertainment,'” Howlett wrote on her Facebook page. “‘This may be due to the actual design of the product, description, search tags or character names that references the Twilight Saga which is owned by Summit Entertainment.'”

Oh, is that right? Because they used “11-20-09” on their marketing materials? So, Summit Entertainment owns the date of November 20, 2009? Howlett is not actually convinced that anyone at Summit even saw her sketch, that this was done by an automated process that found a (vaguely) familiar tag. But if that is what’s considered the intellectual property of anyone, then is there any stopping big companies like Summit from going after even the most minor of references, let alone the entre fan art community? And how are regular people who make fan art supposed to stand up to high-power corporate lawyers? (Answer: They can’t.)

Like we said, Howlett’s sketch is available to buy again on the site that had taken it down. Because a real human looked into the situation and said, “Yeah, that’s stupid. We’re gonna put it back up.” But the fact alone that this happened at all is unsettling, to say the least.