Want to Build a Better, More Stable Robot? Look to the Majestic Roach 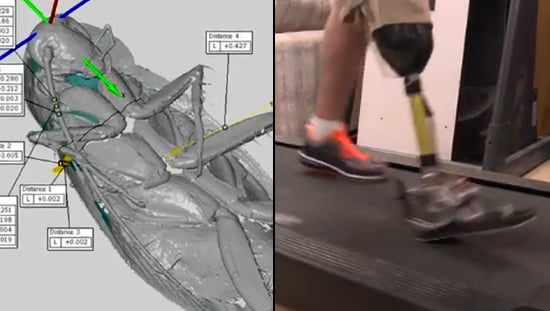 At any given moment, you can assume that scientists are probably building a robot version of something scary, yet we generally trust that they’re not just doing so to provide Skynet with horrible new infantry. Case in point: Researchers at the University of Michigan are shoving cockroaches around to study their uncanny recovery methods to… being shoved around. We all know roaches are fast (and hard to kill), so what can we learn from them?

Essentially, assistant professor Shai Revzen and his team loaded a cockroach onto a special little wheeled cart, which is designed to jerk sideways when the roach begins to cross it in an effort to knock it over. They film and study the results in a technique called kinematic phase analysis. Revzen’s analogy is amusing. “That would be like me running and being tackled by a sumo wrestler.” Unlike Revzen being slammed by a 300+ pound man, the roaches maintain their footing. They performed this test with 15 roaches, and I assume somewhere in the process got a severe case of the willies.

What Revzen observed, though, is interesting. The cockroach’s response time was quite slow, relatively speaking. Their nervous system isn’t quite up to the test, but their mechanical architecture is superior. So it’s biological engineering that makes these bugs so quick, that makes them able to skitter away from the broom, flyswatter, or industrial shovel that you’re trying to kill them with when you see them in your kitchen.

It’s this mechanical design, the insect’s very gait, that Revzen is studying for application in robotics. If they can master the roach’s locomotive, the same designs could be applied to human prosthetics, or to compensate people who are damaged neurologically in ways that impair movement.

Not to mention giving vehicles legs, not wheels and treads. As Phys.Org points out:

More than 70 percent of Earth’s land surface isn’t navigable by wheeled or tracked vehicles, so legged robots could potentially bridge the gap for ground-based operations like search and rescue and defense.

We humans are always studying animals to imitate them, to mechanically recreate the things that nature already perfected millions (or billions) of years ago in other species. Take the creation of robotic bat wings. We need to know how those wings work so we can improve our own aircraft, or at least so Weta Digital can make Smaug look cooler in the next Hobbit movie.