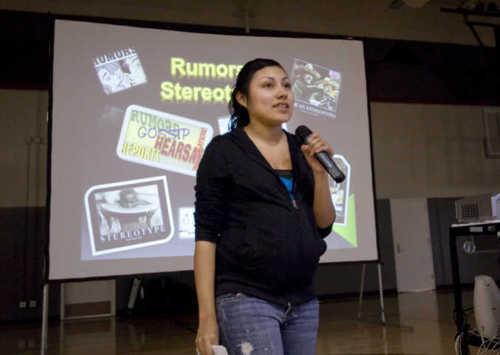 Toppenish High School senior Gaby Rodriguez spent nearly her entire final year of high school conducting a social experiment that put her square in the crosshairs of criticism, rumors, and humiliation. For six and a half months, she led her fellow students as well as the entire teaching staff to believe that she was about to become a teen mother. And Gaby recorded what was said about her and read it front of the entire school.

Only a handful of people knew about Gaby’s experiment including her mother, her boyfriend, her best friend, and the principal of the school, Trevor Greene, who also convinced the school’s superintendent to sign off on the project.

“It ‘happened’ at homecoming,” says principal Trevor Greene, making air quotes with his middle and index fingers at the word “happened.”

“I admire her courage. I admire her preparation. I give her mother a lot of credit for backing her up on this.”

But, the principal continues, “I have a daughter that will be here next year, and I would not let her do it.”

Among the people who also didn’t know about the experiment was the family of Rodriguez’s boyfriend, Jorge Orozco, whose mother thought Gaby was having a boy.

And what happened was close to what Rodriguez expected: people talked behind her back, saying disparaging things about her and her pregnancy. Things such as “Her attitude is changing, and it might be because of the baby or she was always this annoying and I never realized it.” All while she wore a belly made from wire mesh and quilt batting. (In the beginning, she just wore baggy shirts to “hide the pregnancy.”)

While she admitted that she lied to everyone for the whole school year, the reaction to her reveal was positive and she received a standing ovation. Because this was gutsy. In her research, she learned that black and Hispanic teenage girls are more likely than their white counterparts — a statistic that’s relevant for the school’s 85% Hispanic student population.

We salute you, Gaby Rodriguez. In this age of such easily accessible bullying, putting yourself in such a provocative position in the name of research makes you a brave, brave lady.

(Yakima Herald via The Daily What)