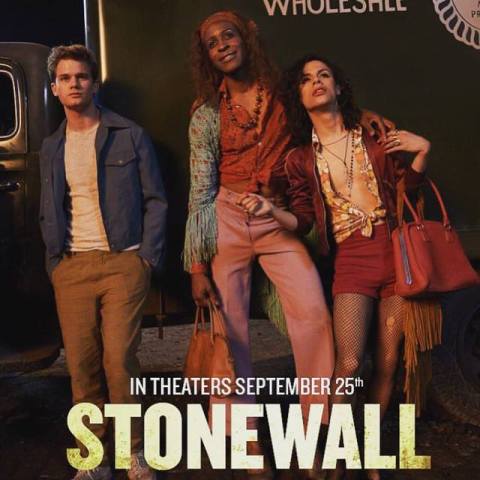 [Editor’s Note: 8/10/15 – 12:40PM] – With regard to Stonewall star, Jeremy Irvine’s use of the word trans***ite in his statement below, as we’ve had several people bring it to our attention and wonder why it wasn’t mentioned/corrected in the piece: I knew that use of the word was incorrect (in fact, for those who are unsure, GLAAD’s Media Reference Guide is very helpful!).  My purpose in writing this piece was to showcase the statements made by the cast and crew of Stonewall, and then share statements by the people who organized the petitions encouraging boycott of the film, letting those statements speak for themselves. You’ll notice there was zero opinion on my part in this piece, as I thought the statements made by the LGBTQ+ folks associated with the petitions were more important than anything I had to say on the subject. But please let it be known that we here at TMS are fully aware that the word is not only incorrect, but offensive, and I apologize for not giving a warning that the word was in the piece. – Teresa

There’s been a lot of backlash after the first images and trailer for the upcoming film, Stonewall, were released. Some have even taken to creating petitions asking people to boycott the film in favor of other films that they feel do a better job of reflecting the contributions of trans women and people of color (and trans women of color) to the historic event. Stonewall director, Roland Emmerich; star, Jeremy Irvine; and writer, Jon Robin Baitz have responded to the criticism, but some critics aren’t entirely happy with the response.

When I first learned about the Stonewall Riots through my work with the Los Angeles Gay and Lesbian Center, I was struck…

Stonewall star, Jeremy Irvine, also took to Facebook to make a statement about the backlash:

To anyone with concerns about the diversity of the #StonewallMovie. I saw the movie for the first time last week and can…

And lastly, writer Jon Robin Baitz made a statement about the film vs. the marketing of the film:

I hope the exchange below is a useful part of the discussion around the marketing, and making of Stonewall, which is…

Not everyone is happy with these responses. I reached out to the organizers behind the petitions asking for a boycott of the film, and they each responded with an exclusive statement for TMS.

Reuben Hayslett of WorkingFamilies.org is one of the people behind the MoveOn.org petition. When I asked how he felt about the responses to criticism of Stonewall by the film’s creative team, he had this to say:

Neither Roland Emmerich nor actor Jeremy Irvine seem to understand their role in Hollywood’s legacy of black and brown erasure — and now, trans erasure. It’s not widely disputed that activists like Sylvia Rivera, Martha P. Johnson, Miss Major and others were at the forefront and initiated the Stonewall Riots, it’s a historical fact. By inserting a fictitious cis-gender white man as a the protagonist, and combining Sylvia Rivera and Ray Castro into some sort of composite character, Roland Emmerich and Jeremy Irvine are telling us that queer people of color are tokenized background characters in the fight for our own rights and lives.

This isn’t just about race either, women from all over the LGBTQ spectrum seems to be missing entirely, from the trailer at least, which we also know to be historically inaccurate. Our stories, and our roles as leaders and figureheads of our own movements, matter. Because our work isn’t over. Our trans brothers and sisters still face deep institutionalized oppression and Roland Emmerich and Jeremy Irvine aren’t just not helping, they’re harming.

Meanwhile, Pat Cordova-Goff of transwomyn of color organized this petition over at GSANetwork, and had this to say about their statements:

When I started the petition, I was frustrated to learn that yet another history account will be told through the eyes of a white person. “History is written by those in power,” and this is proof. Throughout the 2-minute trailer, I watched the passionate and diverse history of our movement be whitewashed and ciswashed. While I am sure white cis people were involved in the riots, there was no need to fictionalize a character to tell this story. The lives of Marsha P. Johnson, Sylvia Rivera, Ray Castro and Storme DeLarverie are fascinating enough. The fact that Stonewall’s screenwriter referenced the expectations of marketing proves that this is a systematic issue.

My petition is no longer aiming to simply boycott a single film. Our goal is to continue this global discussion about the systems of oppression that marginalized communities live under. While Stonewall serves as a specific example of white savior complex, transgender erasure, and silencing of queer history, these issues are much bigger than this film. The over 16,000 signatures are proof, our history cannot and will not be skewed in order to satisfy white supremacy, patriarchy, and capitalism.

In all honesty, I hope Emmerich is correct in saying the film will pay tribute to all folks fairly. But until then, I encourage everyone to say conscious and join us. Also, support other projects like Happy Birthday, Marsha! a film for transwomyn of color by trans folks!

What do you think? Will you be seeing Stonewall? What other films would you recommend instead, or in addition to?