Fugitive Tyrannosaurus Held Up on Charges of Illegal Immigration 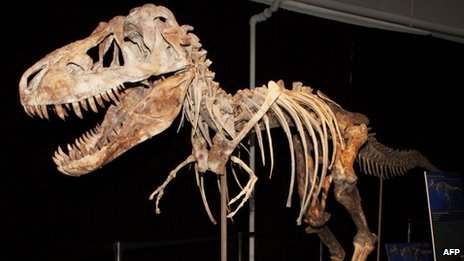 Just a little while ago we told you about the first nearly complete tyrannosaurus skeleton (of a Tyrannosaurus bataar) to come to public auction in years, valued at $95 thousand and selling for more than a million.

And a little while after that, we told you that it was starting to look like somewhere along the line of the fossil’s ownership, which could only be traced as far back as Great Britain, it was stolen. New York courts have agreed with this assessment, and have issued a warrant that will force Heritage Auctions to return the skeleton to its native Mongolia.

The idea that the T. bataar might have been obtained illicitly was first raised when it was revealed that it was transported to the US under the claim that it had been dug up in Great Britain. This raised a number of red flags, starting with how Tyrannosaurus rex‘s known range has been limited to western North America, and Tyrannosaurus bataar (a close cousin or possibly the same species separated by continents) has only been found in Mongolia. Any tyrannosaurus found in the British isles would have been very far afield indeed, and would constitute a significant scientific discovery, if shown to be authentic.

A spokesman for Heritage Auctions has said that “the skeleton had been taken in ‘good faith’ and that it had been sold conditionally, subject to court rulings, and was still in storage.”

Mongolia has had laws on the books since 1924 prohibiting the export of fossils discovered within the country’s borders, declaring them property of the state. According to BBC News, this skeleton was discovered there in 2005. Hopefully the big guy (or gal) will find his way home soon.