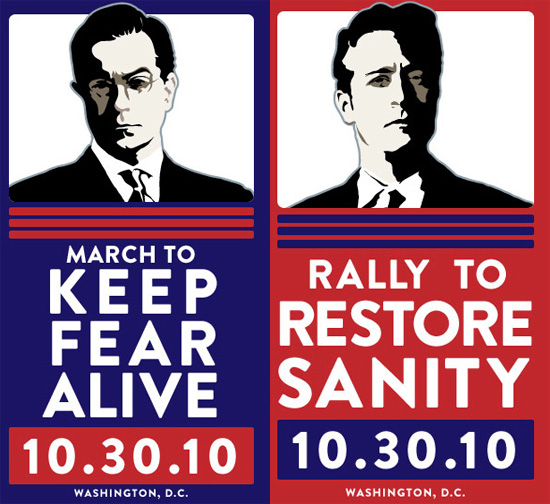 Consider that announcement doubly announced: Stephen Colbert and Jon Stewart will be holding competing rallies in Washington, D.C. on October 30th, “for the 70 to 80 percent of you out there who care about the issues but who also ‘have s–t to do.'”

Last night, Jon Stewart announced his own Rally to Restore Sanity on The Daily Show, when he was challenged by one surprise guest Stephen Colbert, who then apparently sprinted to the Colbert Report studios to announce his own March to Keep Fear Alive, which just so happened to fall on the same date.

We’re looking for the people who think shouting is annoying, counterproductive, and terrible for your throat; who feel that the loudest voices shouldn’t be the only ones that get heard; and who believe that the only time it’s appropriate to draw a Hitler mustache on someone is when that person is actually Hitler. Or Charlie Chaplin in certain roles.

Are you one of those people? Excellent. Then we’d like you to join us in Washington, DC on October 30 — a date of no significance whatsoever — at the Daily Show’s “Rally to Restore Sanity.” Ours is a rally for the people who’ve been too busy to go to rallies, who actually have lives and families and jobs (or are looking for jobs) — not so much the Silent Majority as the Busy Majority. If we had to sum up the political view of our participants in a single sentence… we couldn’t. That’s sort of the point.

America, the Greatest Country God ever gave Man, was built on three bedrock principles: Freedom. Liberty. And Fear — that someone might take our Freedom and Liberty. But now, there are dark, optimistic forces trying to take away our Fear — forces with salt and pepper hair and way more Emmys than they need. They want to replace our Fear with reason. But never forget — “Reason” is just one letter away from “Treason.” Coincidence? Reasonable people would say it is, but America can’t afford to take that chance.

So join The Rev. Sir Dr. Stephen T. Colbert, D.F.A. on October 30th for the “March to Keep Fear Alive”™ in Washington DC. Pack an overnight bag with five extra sets of underwear — you’re going to need them. Because, to Restore Truthiness we must always… Shh!!! What’s that sound?! I think there’s someone behind you! Run!

While the Colbert/Stewart rally phenomenon is thirty-eight percent Internet hijinks and seventeen percent fiery political idealism, remember that there’s a good cause to be served as well: The “Restore Truthiness” campaign, which is not officially affiliated with Colbert but which is being conducted using DonorsChoose.org, a nonprofit of which Colbert is a member, has already raised more than $240,000 towards funding underserved classrooms, and is shooting for $500,000.

(via Mediaite, E!. pics via BuzzFeed.)