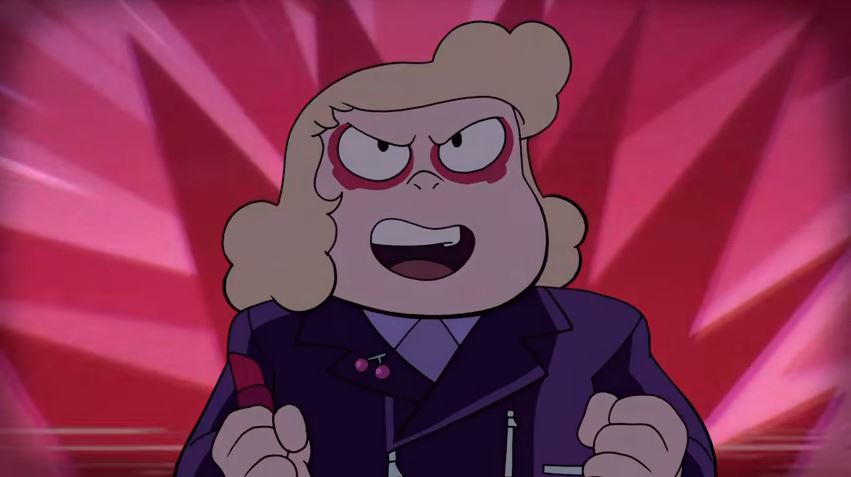 The Recap: Sadie is stressed and exhausted from being the only employee left at the donut shop. She finds an outlet for her anger as the lead singer for Steven and the Cool Kids’ band, and finally quits her job so she can have something she enjoys.

I don’t take back what I said about the show needing to more fluidly incorporate its Homeworld and Beach City plots … but boy does that make breather episodes like this one all the sweeter. If “Raising the Barn” is the best episode of the run, then this is the most cathartic, paying off a character arc that’s been a long time coming.

Sadie’s been a pressure cooker much longer than Lars has been in space; in fact, him being gone is the best possible thing that could’ve happened to her. He enabled all of her worst qualities and also felt completely justified in treating her like trash—and now that they’re apart, Lars can work on growing as a sympathetic character, and Sadie can finally have things like “friends who support her.”

The Cool Kids were always a smart take on the archetype they’re named for, but now they’re an uncomplicated breath of positivity while everyone else struggles with their issues. Their embrace of Sadie’s skills, and her willingness to accept their praise instead of isolating herself, is a triumph of a moment. These kids have had it hard, and after a certain point I just want to spend ten minutes watching them have a good time and care about each other.

And then there’s that musical number. What a treat. The minor riff on the theme song, lyrics that are both a little playful and dead accurate for anyone who’s had an overtaxing, underpaying job, and the music video style effects combined with Sadie’s impromptu in-universe gore effects … it’s great, and very much in the vein of the stylistic shock horror that her character’s always been fond of. It serves the story, it speaks to the character, and it’s a solid composition in its own right.

I’ve talked before in this run of recaps about the need to keep emotional grounding in the process of incorporating its story elements—some of Steven’s issues have to be plain old teenage angst or fear of inheriting your parents’ bad habits, because the audience can’t inherently relate with “my mom is an infamous war criminal and also I’m on the run from an entire empire.” And Sadie has somehow become that grounding for the show’s human female cast.

The good bits of Peridot’s recent episodes aside, the show has had a strong focus on exploring its male cast members lately. There are clearly still things going on with the Crystal Gems, but they’re not especially in focus; Connie has been in a combined two minutes of this entire arc (and I’m still laying money on a magical kidnapping), and other Beach City residents like Jenny have always kind of had their lives together—Nanefua’s speech was awesome, but the meat of the episode was about Dewey and Steven learning when to take responsibility.

So here we have Sadie. Overworked, deeply depressed to the point where I still hope she seeks help, lonely Sadie. She’s the one who gets to live out a little bit of wish fulfillment this time, where her prior focal episodes have explored her well-meaning but overbearing mother, her feelings of isolation, and her repeated tendency to settle for a guy who doesn’t respect her because she’s afraid of throwing away what she knows for the sake of something better.

It’s a bit of a shame that we don’t get to see Sadie Killer play her first gig (let’s be real, it didn’t go great—they have one song), but things end on a positive note of moving forward and life getting better. SU does gut punches well, but without hopeful episodes like this, the numbing effect would set in quickly.

The last episode of this run is … okay, who asked for Kevin? I’m pretty sure the answer is “no one.”

Vrai Kaiser is a queer author and pop culture blogger; they just love Sadie so much. You can read more essays and find out about their fiction at Fashionable Tinfoil Accessories, listen to them podcasting on Soundcloud, support their work via Patreon or PayPal, or remind them of the existence of Tweets.