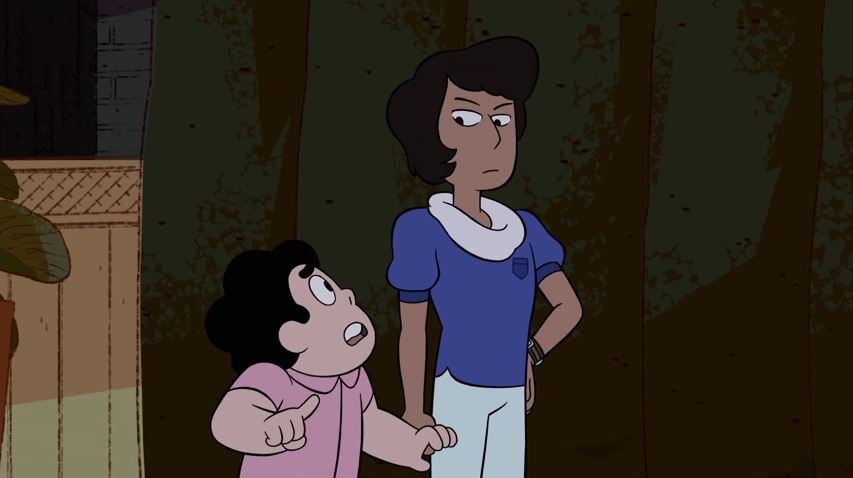 The Recap: Steven agrees to go to a party thrown by Kevin (ugh) because he heard Connie would be there. His willingness to take Kevin’s advice on how to win Connie back turns out to be a terrible decision, but the two finally make up.

I’ve never been so pleased to eat my words. Connie wasn’t somehow in some dire need, but just plain old taking time to process her feelings. While part of me wishes their time apart hadn’t taken a full Steven Bomb, the feeling of that time apart as an eternity is effectively in service of capturing how having a fight feels.

While it was something of a trial to suffer through the utterly insufferable Kevin for a fairly by-the-books “impressionable boy takes bad advice from a jerk” story (if a well-executed version of it), it’s nice to see that the Crewniverse hasn’t lost its touch in making sure it respects its characters rather than reducing them to devices (though again, that marketing is putting the hurt on any ability to take things on faith, because who knows how long we’ll be waiting next).

Looking back on this miniseries—because what else can we call them at this point—as a whole, the central theme is broken communication, usually because one party tried to take everything on themselves: Steven tried to paper over getting kidnapped with a martyr complex, Peridot tried to take care of Lapis by hiding her own feelings, Sadie singlehandedly kept the donut shop running even when it was far too much for one person, and Kevin is a jerk whom I hate.

And then there’s Pearl, this run’s traditional “completely unremarked upon but very concerning plot thread.” Her attempts to speak to Steven surpass emotional discomfort and run straight into a physical inability, throwing the doors wide to the traditional wild theorizing. Was this some manner of technology installed in her? By whom? How long has this been the case? It’d be nice to spend some time with Pearl without the focus being on her many layers of trauma, but that ship might well have sailed. I can’t advocate for more plot progression and more chill hangouts simultaneously.

Since I’ve not discussed the art much over these recaps, let’s take a brief detour: the show’s cemented itself as having a flexible individual style rather than house uniformity; possibly as an homage to 90s anime, where individual episodes would “feel” like whoever was serving as the head artist. This is fine when talking about things like “how fluffy vs pointy is Pearl’s head,” but has historically been a problem when it comes to proportions. That continues here. Peridot recovers somewhat from her gremlin shrinkage, once more reading as slightly taller than Steven, plus hair; meanwhile, Sadie has shrunk considerably from being visibly older than Steven to being his exact size.

The artistic direction is never bad, but big standouts like the “Working Dead” musical number, the self-needling in “Gemcation,” and the moody color composition during Lapis and Peridot’s breakup are the clear standouts. Several of those also came at the hands of the art team’s new additions, which is a good sign going forward (although the series can’t ride on unevenness as a side effect of team experimentation for much longer).

As a whole, we’ve ended up with a mostly well-accomplished set of variations on a theme, with a setup that the Crewniverse has been using for just about every Bomb: one central arc that resolves over the course of the miniseries, several unresolved threads that serve as hooks for future developments, one big Gem shakeup, and two or three small-stakes check-ins with Beach City citizens.

The Lapidot arc is the clear stumbling block, less in what the writers probably intended and more in how it was paced, both within this arc and within the larger considerations of Cartoon Network’s capricious marketing. There’s still something to salvage there, but hopefully it’ll be sooner rather than later, without giving a new (worse) status quo time to gel.

And that’s it for this round! I hope you all enjoyed taking this wild ride with me. These episodes are due to air on TV “in December” with no specific dates given; hopefully that doesn’t mean we’ll be waiting another six months before Cartoon Network decides to put the next crop of episodes on a single USB and slip them under an old woman’s door mat before declaring a fun scavenger hunt for the fanbase.

I love this show, but sometimes …

Anyhow. Take care, y’all. Be excellent to each other.

Vrai Kaiser is a queer author and pop culture blogger; they’re gonna take a nap now. You can read more essays and find out about their fiction at Fashionable Tinfoil Accessories, listen to them podcasting on Soundcloud, support their work via Patreon or PayPal, or remind them of the existence of Tweets.