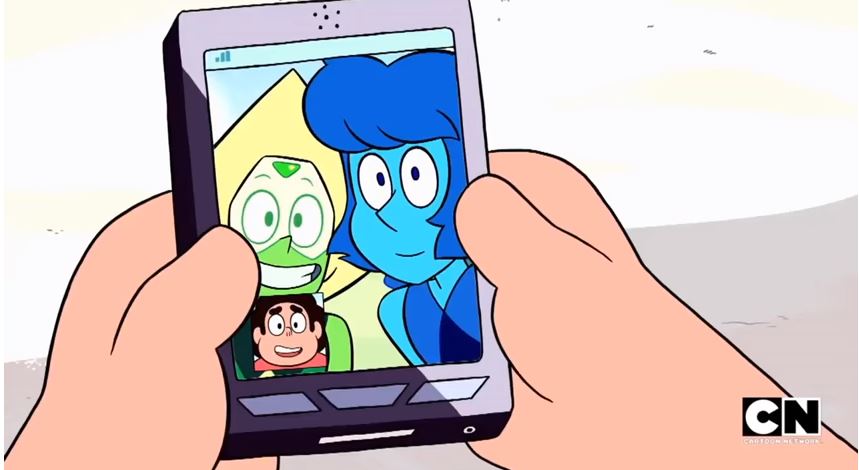 The Recap: Steven goes to visit Lapis and Peridot on their farm. Lapis, afraid that Steven’s actions on Homeworld will bring another war to Earth, decides to escape into space with the barn. When Peridot confesses that she wants to stay and fight, Lapis leaves without her.

The train of consequences just keeps rolling. This episode is downright heavy, effectively so, and certainly the best of the new batch thus far. It seems like a strange decision to break up the Lapidot dream team, Florida and Zuke, for such an important development in the pair’s relationship, but Amber Cragg makes a strong showing in her premiere episode, while Florido provides a sense of grounding.

Steven’s actions wind up providing a much-needed catalyst for a relationship that’s established itself in one mode: Peridot did a Bad Thing, and she’s atoning by making herself the caretaker of Lapis’ wellbeing. And that basically hasn’t budged an inch since they started living together.

These are complicated, loaded issues, and the episode is clearly taking care to handle them delicately. It’s not quite so raw as “Lost at Sea,” but it taps into the same echelon of raw feeling, this time from Peridot’s side. There’s the implication that Peridot believes she doesn’t deserve to ask for anything more than what she has; she hurt Lapis, and a condition of being forgiven (in her mind) was allowing Lapis to set the pace on what they’d do together. Initially, that involved truly thoughtful foundational habits: learning to be mindful of Lapis’ triggers, encouraging her interests, providing support and a sounding board. All of those are positively modeled behaviors.

But a relationship is a team effort, and “Raising the Barn” … er, raises … an issue that’s often neglected in discussions of relating to those with trauma. Being a thoughtful and compassionate partner doesn’t mean giving up all of your own wants and needs and finding fulfillment in the other person’s happiness at the cost of your own. It’s one hell of a balance, discussing how to advocate for yourself without tipping into saying the other party should just “get over things,” but it’s equally important.

Peridot’s low self-worth and anxiety are no more nor less important than Lapis’ anger and trauma, and there’s deliberate care taken not to devalue the latter while arguing for the former. Shelby Rabara has always been a cast MVP, but her resigned delivery as Peridot lists off things Lapis needs, or the halting admission that she avoids bringing up things she knows will bother Lapis (coupled with some fine animation; it’s fantastic to see Peridot reverse some of her gremlin shrinkage) hit right in the heart.

And while part of me believes (desperately hopes?) that Lapis won’t be gone for long, that result too—with its sunset reds and dark shadows falling over the characters as Lapis makes a decision she’ll likely regret—feels earned. On the one hand, it is cold of Lapis to completely brush off the concerns of someone she supposedly cares about very, very much (she’s certainly not offering to take any other gems to space), and on the other a believable in-the-moment reaction for her to run regardless of what it’s cost her. In her mind, the potential outcome of staying is a monster that dwarfs everything else, spurred by her immediate anger that Peridot “lied” to her by trying to spare her feelings. It’s all very human for these sentient rocks.

I look forward to the fandom picking one party to thoroughly demonize while the other party is elevated to prompt beatification, because nuance is for chumps.

The next episode has the word “kindergarten” in the title, so brace yourselves accordingly.