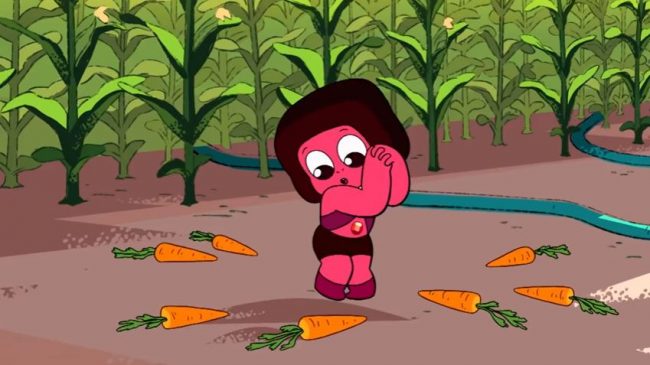 The Recap: Garnet and Steven witness a falling star that turns out to be Navy, the most airheaded member of the Ruby squad. Determined to help her fit in on Earth, Steven takes her to the barn and asks Peridot and Lapis to help him show her the ropes. But Navy’s ditziness turns out to be a façade, and she double crosses them as soon as she’s able to get ahold of the Ruby ship.

Turns out I was totally wrong about the schedule! This is what happens when I try to predict Cartoon Network’s movements. I don’t have the requisite six degrees in piercing the veil for that.

In keeping with this season’s theme of mixing things up in the writers’ room, this episode features an unusual pairing: Raven Molisee and Lauren Zuke, from teams known for doing quieter contemplative episodes and more visual comedy-focused ones, respectively. The results are really refreshing, even as I’d begun to feel a bit run down by some of the newest episodes. It makes it all the sadder that Zuke’s apparently finished their tenure with the show, and we only have a few more episodes of their work to enjoy (there is an ABUNDANCE of off-model gremlin Peridot in this episode for comedy purposes, but I think we’re all resigned to that at this point).

That balance between contemplative moments and broad comedy helps set up the episode’s central tension. It’s fairly obvious early on that something isn’t right. It’s…kind of like bad fanfic, in the most brilliant way. The setup is similar, in broad strokes, to one of the show’s main appeals for many (self included): the idea that all characters are complex, and most are all on a spectrum of being redeemable. Every Gem who’s shown up at one point or another has been at least temporarily considered as a potential new recruit.

Well, here it is: a super sped-up version of the arcs both Lapis and Peridot follow. But it lacks effect, because it lacks stakes. Nobody struggled, nobody was conflicted, so there’s not really any satisfaction in Navy seeming to embrace the wonders of Earth. And, as is so often the case with characters who become beloved for their small screentime and funny one-liners, one quickly realizes that Navy would be unbearable as a main member of the cast. At a certain point, you’re almost left begging for it to be a con, because the flimsy construction of it all is so (deliberately) visible by contrast.

On top of that already solid tension, we’re finally given a chance to examine Lapis again for the first time since she and Peridot became close. Lapis has always been an angry person (at least in the time we’ve known her), not without reason, and it’s worth exploring how much of that remains as she adjusts to Earth and begins to form bonds with others. Providing Navy as a means for Lapis to question herself and her coping mechanisms is a much subtler, less judgmental way than having one of the other Gems or Steven ask why she can’t just let go.

Molisee in particular I suspect walks a fine line of letting Lapis question herself but not suggesting she’s wrong for dealing with her trauma the way she does – for the character to express doubt without the story doubting her. (My favorite small touch of the past season remains normally blunt Peridot’s ability to grasp and provide support for Lapis’ triggers.) Lapis’ moment of triumph at the end – that nobody’s that well-adjusted – is a bit of a darkly comic nudge at the show, but also kinda just…at life. If you’ve ever lived with mental illness, that experience of ‘okay but what are you HIDING’ around seemingly carefree people is too real for words.

And it’s a message worth including in a show about the power of love and redemption: sometimes that attitude means people are gonna take you for a ride. Literally, in this case. Charlene Yi deserves special kudos for selling the transition to sinister in those last few moments, working not just the impression that possibly everything we’ve ever seen about Navy is a put on, but also adding a quality homage to the famed anime “ojou laugh.” I would like to shake the hand of whoever in the recording booth pushed for that particular choice.

It’s not clear yet whether there’ll be a ripple effect from Navy getting her ship back – whether she’ll get the other Rubies back from space, whether they’ll report to Homeworld, etc. I have my doubts, with so many other irons in the fire, but one never knows. But all of that is far less weighty than Garnet’s excellent final line: “it was still worth a shot.” Now that’s the SU I love.

Next time (I’ve given up on guessing when) we theoretically have a fourth Lion episode, which could end up feeling out of place a la “Tiger Philanthropist,” but….traditionally the Lion episodes are quite the game changers, and usually in regards to Rose somehow. We’ll see, I suppose. Hope to see you there!