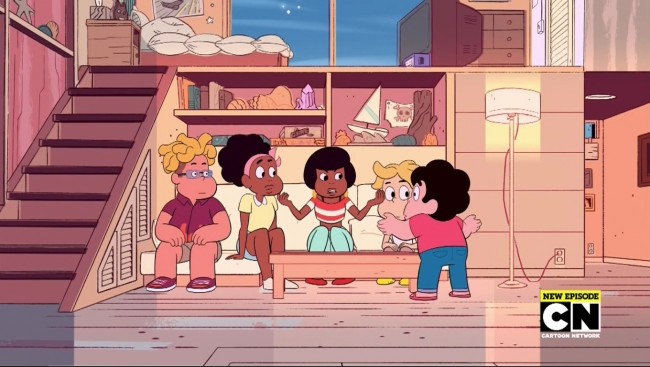 The Recap: After Steven orders some mozzarella sticks from Beach Citywalk Fries (containing “the basic elements of a pizza”), he accidentally reignites the age-old restaurant war between the fry shop and Fish Stew Pizza next door. Feeling guilty, Steven enlists Ronaldo, Peedee, Kiki, and Jenny to try and help him solve the problem.

It’s official: the Crewniverse has figured out how to effectively deploy Ronaldo. So much so that when he becomes this episode’s victim of the current “Steven’s naïve efforts do more to hurt than help” run (not including the feud itself, since he’s able to set that to rights), it’s really more painful than funny to see him left hanging (the whole joke, in fact, seems unusually cruel for the show’s usual ethos).

That might be the biggest change this episode, in spite of the fact that we’re getting to spend more time with two characters we’ve not seen much up to now. Even then, they’re still mainly notable as “Peedee and Ronaldo’s Dad” and “Kiki and Jenny’s Dad.” Well, we got that and a few lovely grace notes like some sisterly bonding between Kiki and Jenny, which we’ve never been privy to with Jenny mostly hanging out with the cool kids, and the aforementioned girlfriend bit. The teens of Beach City are pretty universally good kids, and it’s never a chore to spend time with them.

The simplicity isn’t necessarily a bad thing–the episode has some absolutely fantastic sight gags, though the title cards feel a bit out of stylistic left field without the framing justification of something like “Rising Tides, Crashing Skies;” the whole segment with “Steven’s” and Amethyst’s surprise superstar cooking skills (complete with super-heightened anime-esque reactions) is a joy, and both feuding dads are sweet enough (their immediate agreement to end the feud when they’ve bought into the star-crossed lovers ruse goes a long way toward making them endearing)–but it does make this episode kind of hard to talk about in comparison to the meatier stuff coming up later in the week. Having long accepted that while the AV Club will be there to take a distanced, Real Critic Approach, I am over here in the other corner content to Chris Hardwick it up.

Still, that doesn’t mean that this run of Beach City Resident episodes isn’t important. In addition to, again, the recurring theme of “Steven makes people’s lives worse by accident” and further stepping up his manipulation game, more and more proving to be his mother’s son (his cutesy shuffle as Our Two Dads beg him to close down “Steven’s” is a new level in both preciousness and deviousness), these episodes have had a lot to do with the subject of family. Reassessing what family ties are important, whether or not they’re blood (Sour Cream); realizing that you might be pushing people away with your actions, even if you want their approval (Lars), accepting that your family accepts you as you are and not for what you can do (Peridot), and finding that a common opponent can help heal over old differences and potentially mean starting fresh (the Frymans and Pizzas).

That central theme has always been core to the show, of course, and it seems as though it’s returning to its roots before diving deep into a lot of new concepts and a heavier emphasis on the Revolution, Jasper, and the threat of Yellow Diamond. As we discussed with “Steven Floats,” a human connection is critical to give these grander stakes weight and meaning–otherwise we stray into Roland Emmerich territory, ordered to feel sad because a symbol has been exploded.

Further, all of these are examples of families being tested in some way, which has all sorts of potential applications for the Gems, particularly with Lapis’ unresolved issues from her time as Malachite and how the new family will really, practically work in a situation where they’re called on to act as a team (not including baseball). While the original Crystal Gems were/are all united by their loyalty to Rose and present love for Steven and the Earth, Lapis and Peridot haven’t yet earned their stars, so to speak. In fact, with Peridot’s worries about her powers, I’m not sure if I’m excited or nervous to see what’ll go down when she’s inevitably injured seriously enough to need to regenerate.

The last episode in this set is due to focus on Kiki, making it the first episode she’s gotten the spotlight over her sister–and with an absolutely irresistible pun to boot…although knowing SU’s frequently unreliable naming conventions, it’s about 50/50 as to whether the reference will extend past the title card.

In the meantime, I feel I should inform you that there’s now at least one filmed version of the SDCC 2016 panel available now, which you can watch below, though the quality is a little on the shaky side. It features singalongs of all the hits up to this point, some fascinating tidbits (DeeDee Magno Hall supposedly recorded a duet with Patti Lupone!), and a few hints at what might be coming up in the future.

Matt Burnett also came out on Twitter asking folks to be conscientious about spoilers for the second half of the Summer of Steven–the comment section here has always been good about aiding those who want to be surprised, but I thought I’d relay the information anyway (though I suspect he might be referring to Uzo Aduba’s guest role, in which case the cat’s a bit out of the bag). Regardless, you readers do whatever’s right for you, and we’ll get through the rest of this together.

Vrai is a queer author and pop culture blogger; they’re still thinking about the cheeto puff. You can read more essays and find out about their fiction at Fashionable Tinfoil Accessories, support their work via Patreon or PayPal, or remind them of the existence of Tweets.