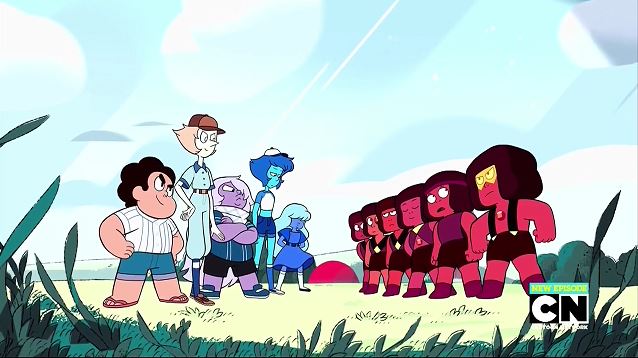 The Recap: In order to keep the team of Rubies from finding Peridot, the Crystal Gems disguise themselves as humans and play a game of baseball to determine whether the Rubies will have to leave forever; however, it turns out that the Gem in trouble isn’t Peridot at all, but the missing Jasper.

This week seems to have been born of the fine anime tradition of approaching ostensibly life-or-death situations in the most gloriously stupid way possible (in fact, I very much suspect that we have a deliberate homage of Samurai Champloo’s superlative baseball episode on our hands). Which is to say, it is delightful from the ground up, and exactly what the show needed after the heaviness of Lapis’ return.

If nothing else, it’s nice to see the show go back to its roots of just being cute—that goofy, gentlehearted core has grounded the show since day one, and it’s reassuring to see how effortlessly the writing returns to that breezy place with the newfound dynamic among the Crystal Gems (and while Pearl and Amethyst still don’t get much to do this episode, the writers are so familiar with them by this point that every line or sight gag is made to count—I really can’t emphasize enough how fantastic the batting average is on the jokes here).

This is an episode of small touches: the completely mundane core of the central game means there’s plenty of room for stylish execution and a higher emphasis on visual cues than was possible in the more exposition or event heavy preceding episodes. But even when the plot is firmly on the backburner, we’re still learning things –Lapis has found her place as the Daria of the team, Peridot is really growing into that selfless sacrifice thing, and Jasper is an enemy of Homeworld as surely as the rest of them (setting up, I’d wager, for the old adage “the enemy of my enemy is my friend”). There’s a sense of momentum in these little glimpses, recalling the inch by inch worldbuilding of season one.

It’s also nice to see the writers find a new way for Ruby and Sapphire to be an obstacle. The fact that we almost always see them as a literal cohesive unit—the ideal form of a stable, communicative longterm romance—doesn’t immediately offer a lot of reasons to bring them out unless something dire is at stake. Making the duo That Couple who’re sickeningly sweet and effusive and spinning conflict out of that (while also allowing them to carry on being utterly adorable) is a great way to keep things fresh and have some gentle fun with that unshakable bond. And to stick it to the last two people who were trying to insist that Garnet was made up of “just friends.” Do those people still exist?

Speaking of Rubies, I dearly hope this isn’t the last we’ve seen of the Ruby squad (nicknamed Eyeball, Army, Leggy, Navy, and Doc, if you were wondering). Liu and Johnston are great for strange visual gags, and they put a lot of care into distinguishing each of the five nigh-identical new characters. They’re broad sketches, but it’s enough for them to feel distinct and intriguing, and having one personality trait per character doesn’t feel cheap when you’ve only known them for about eight minutes. This has been a strength with a number of background gems (Yellow Pearl, anyone?), but it’s extra important here to sell the sense that these are goofy individuals beneath the looming monolithic threat of Homeworld. I would happily follow that spaceship on its journey to Neptune, and that’s successful charm right there. Credit where credit is due to Charlyne Yi, as well, voicing all six (five? … six) of the Rubies with voices just distinct enough to sell their individuality. But if I start complimenting the cast we could quite easily be here all day (Jennifer Paz’s deadpan read of “Bob” is the MVP of the episode, for the record).

It’s not exactly clear where the series is going from here, though we’ve now passed out of episodes that were leaked in part or in whole even before their advanced airing in France, with one more (“Steven Floats”) that made it all the way to being available early solely because of scheduling weirdness. It would seem we’re heading into another run of quieter episodes; and while I could happily watch a solid run of Gem shenanigans, the show’s love for its ensemble cast is one of its great strengths. With nine episodes gone since we’ve spent time with Connie and more than a dozen since the townsfolk last appeared (“Sadie’s Song”), we’re more than due for a cooldown period (though maybe not too long, if I might be selfish—there’s definitely more for me to carry on about in those big meaty plot episodes), not to mention a look at how this influx of interstellar travelers might be affecting Beach City at large. I wouldn’t be surprised if Jasper’s reappearance is snuck in there among the quiet moments, either. Here’s hoping the “Summer of Steven” keeps going strong.

Vrai is a queer author and pop culture blogger; they’re not sure they can take another hiatus so soon. You can read more essays and find out about their fiction at Fashionable Tinfoil Accessories, support their work via Patreon or PayPal, or remind them of the existence of Tweets.