Welcome back to Beach City! 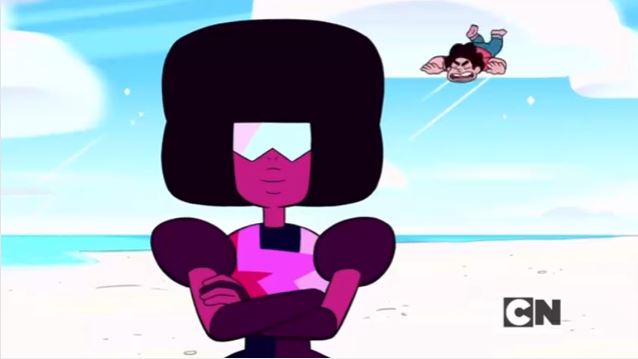 The Recap: Steven discovers he has the power to float, but accidentally jumps too high and gets stuck on a long, slow descent. Worse, it seems like the fall is going to take so long that he won’t get to be there to try the Big Donut’s fresh new made-in-house donuts.

Welcome back, Beach City! And welcome back to you, readers, as we embark on this exciting Summer of Steven: a solid block of episodes that will reportedly be airing the rest of season three all in one go. Because consistent airing schedules are for chumps. Still, if I drop dead in the middle of bringing these episodes to you, it’ll have been for a pretty swell cause–recapping this show has always been a little slice of joy (even if I will be packing my bags and moving away, Griffin McElroy style, in the middle of it).

Right, that’s enough preamble. So this is the episode that’s existed in a weird liminal space since we last spoke: French viewers got it at the end of the last run of episodes, but nobody else did. And having seen it, I am now even more baffled by that decision–“Steven Floats” is a pretty perfect way of setting the tone for at least the next half dozen episodes, which look set to settle in and check up with how Beach City changed while Steven and the Gems were running around dealing with world-threatening Gem stuff.

On the surface, I can’t think of a lower stakes episode of SU in recent memory: Steven has a cool new power, and at the rate he’s coming down from the sky he might now get the very first fresh donut. It’s completely inconsequential, and Steven’s focus on the donut completely sidelines the superpower angle. And that’s kind of what makes it perfect.

Steven tends to yo-yo back and forth between being wise beyond his years and prone to childish fixation, a trait that’s both reasonable given the amount of stress he’s regularly under at an already stressful time in an adolescent’s life, and pretty cleverly explained by his growth (physical and psychological) being tied to his emotions.

It makes sense that Steven is fixating on this donut: he’s been gone for a long time from a town he clearly loves, and the “fresh new donut” offers him the chance to come right back to experiencing something new with his home rather than coming back and feeling left behind (his distraught fantasy, after all, features the whole town first being sad about his absence and ultimately moving on without him). It’s a lot easier to focus on one little issue rather than a big web of complicated hopes and fears.

Even as Steven flies high enough to see how tiny Beach City is in the grand scheme of things, it doesn’t change how important it is to him.  And it’s the same for us in the audience (or so I’d posit). It’s cool to see the big battles and hear about how Earth’s alternate history, but at the end of the day it’s Beach City we care about. It’s the human face we put to the consequences of global destruction. We need it as much as Steven needs that donut.

It’s also interesting to see Steven moving from awe to irritation at his powers – they’re cool and all, to him and us, but for him it means fumbling around without a rule book while his own body flips out on him (something something puberty metaphor moving on). And deeper than that, they tie him more and more to his mother – a very complicated subject, as Steven says himself. Every time he gets a new power that Rose had also, it raises the nebulous question of how much he’s growing up and how much he’s becoming his “old self” in a sense. “You’re just like your mother” has some very different and heavy implications for poor Steven.

And have I mentioned how nice it is to let the three original Crystal Gems take up the reins on goofs again? Not that I don’t adore Lapis and Peridot, but having that original dynamic back really lent itself to that feeling of taking a small breather. 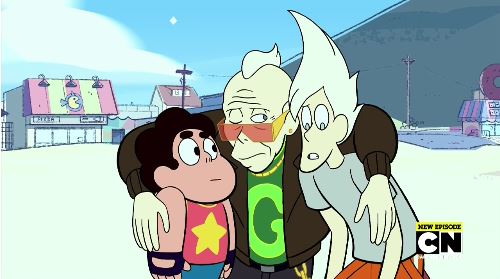 The Recap: Greg’s former manager Marty comes to town to give him a long deferred check for $10 million and, running across his son Sour Cream, promises to help with his DJ show as a way of making up for lost time. The show turns out to be a front for Marty’s deal with Guac-cola, and Sour Cream elects to do the show on his own.

If the last episode was simple but thoughtful in the style of a Miyazaki movie, this one is straight up afterschool-special middling. There’s not a single beat to Sour Cream’s story that couldn’t have been predicted the second fans noticed the conspicuous resemblance between him and Marty way back in “Story for Steven.” It’s perfectly watchable, its beats executed competently and with a minimum of the contrivance that usually plagues these kinds of plots (there’s no forced estrangement between Steven and Sour Cream when Steven starts pointing out Marty’s scummy behavior, for instance), but this is Steven Universe, and “perfectly watchable” for other shows ends up being a step down here by comparison.

There are some enjoyable touches: Marty’s aged design has a delightfully sleazy mug that looks like a Brundlefly-esque melding of Rick Sanchez and Montgomery Burns, Steven’s awestruck devotion to the unsung glory of the roadie (while clearly having no idea what the technical side of the job entails) is a great running joke, and Sour Cream’s general earnestness saves the “rebellious teen” elements from grating too much.

Playing Yellowtail’s Peanuts-style mumbling almost as a foreign language that Sour Cream later slips into without thinking is clever, working both as a little bonding moment (if “Steven Floats” carries the subtextual unease of Steven becoming his mother, this is a nice counterpoint of SC accepting that he’s a bit like his father) and a little potential piece of that alternate history for those who want to explore it.

But there’s no denying that the episode’s most interesting offering is the hook revealed in the last thirty seconds: that Greg’s now a millionaire after years of struggling to make ends meet (while still keeping Steven comfortably provided for, because Greg is the best dad). Part of me worries that this big a change to the status quo won’t stick, and I’m hard-pressed to think of ways the show could plunge Greg back into poverty without the move feeling unspeakably cruel. Well, I guess we’ll have to wait. See you tomorrow!

Images via Cartoon Network.
Want more stories like this? Become a subscriber and support the site!

Vrai is a queer author and pop culture blogger; they’re currently fulfilling their childhood dream of owning all the Eevees. You can read more essays and find out about their fiction at Fashionable Tinfoil Accessories, support their work via Patreon or PayPal, or remind them of the existence of Tweets.