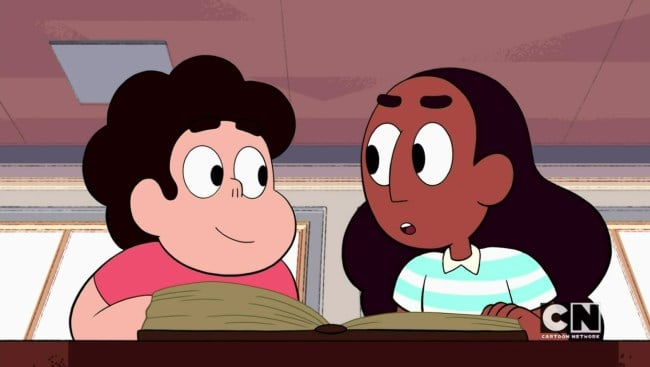 The Recap: Steven and Connie visit the library. There, they find the journal of Buddy, the first mate of Beach City’s founder, as he chronicles his journey around the world and chronicling of many Gem landmarks.

Well, things are certainly back to normal. The show is on a weekly schedule; new episodes are leaking early because CN’s security is akin to an incontinent giraffe; and extreme sections of the fandom have banded together to harass a queer creator off Twitter for not matching some kangaroo definition of ideological purity, because we cannot simply have nice things from the most progressive show on television.

There’s a distinctly 90s feel to the episode’s framing, setting up the magic of reading in a way that would make LeVar Burton proud. And then it doubles down on that theme with some Wishbone-esque storytelling, the narrative being read using characters from present day gussied up in period clothing (with the caveat that Gems really were there). It’s a pleasant little throwback, and earnest in its intent to promote the excellence of libraries, but the appeal is more in the titular book itself.

It’s always interesting to see the Gems contextualized through the eyes of humans, certainly; but more than that, this might be the first episode to really give a sense of how the worldbuilding we’ve seen so far fits together. Without access to warp pads, Buddy has to travel around from place to place on foot, and there’s finally a sense of flow and distance between these familiar Gem monuments, like reverse-engineering a Dark Souls map (I’ve just accepted this is gonna be a reference-heavy recap, folks; sorry about that). Seems like the Lunar Sea Spire might be what’s left of not-Russia, given it’s the only X marked in a big body of water?

Having Connie and Steven as our eyes also gives the episode a chance to play around with unreliable narrators, which it tips its hat to with the comparison of historical vs. Jamie-fied Buddy at the end. There’s much kerfuffle to be made over Rose’s lions in particular, but we don’t know if they were Earth lions or if we’re being shown a skewed interpretation to hide certain revelations from us for later. It also means that this episode could be contradicted by just about any explanation in future without betraying the show’s logic; perhaps that’s why the episode only barely touches on the actual sightseeing that serves as the its narrative backbone.

While it’s easy to imagine a more madcap, experimental version of this device, that’s not really Abrams and Mitroff’s style–by and large they trend toward muted, reflective pieces that wind up feeling warm rather than laugh out loud funny (among which “Same Old World” might be the pinnacle), and the reservation in how Buddy’s story is related reflects that.

But while there’s definitely a funnier episode hidden in here somewhere–not that it isn’t nice to have Eugene Cordero back doing those pitch-perfect theater major dramatics–there’s something appreciable in what the script does wind up settling on. In a landscape where the desire to get to a story first, to be the youngest and cleverest and quickest to do something is a seeming constant pressure, there’s a relaxed sweetness in Rose’s message about how new experiences can reinvigorate a story, even if it’s been told before. There might be nothing new under the sun, but we’re forever seeing it with new eyes and new understanding, even as an individual going through various stages of life.

Practically speaking, we only hear about one landmark that Steven doesn’t already know about in some capacity, but we do get a chance to step back and look at it–something I imagine will be an important part of the coming seasons. Steven’s beginning to grow up, after all, and part of being a mature adult is being able to understand how things all fit together.

And also I look forward to seeing Pearl’s lauded turn as King George III (I kid, of course; everyone knows she’s Eliza).

Next week, if the preview for this run of episodes is any indication, seems to be yet another appearance from Stevonnie. I’m looking forward to it–we still haven’t really gotten a chance to see them interact with the Gems that much, and if “Know Your Fusion” proved anything, it’s that there’s plentiful material in seeing a fusion figure out who they are. See you there!

Vrai is a queer author and pop culture blogger; they desperately hope that rumor about an upcoming episode being titled “Gal Pals” turns out to be true. And that it sets a new benchmark in gay. You can read more essays and find out about their fiction at Fashionable Tinfoil Accessories, support their work via Patreon or PayPal, or remind them of the existence of Tweets.