Good to have you back, Lapis. 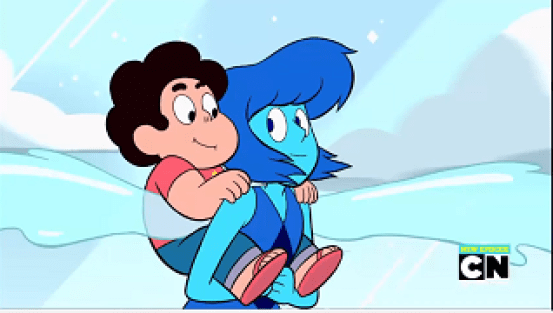 The Recap: Steven tries to help Lapis find a place that she can call home. While Steven tells Lapis about Earth, Lapis at last tells the story of how she ended up trapped in the mirror.

These recaps have often been guilty of not giving Lapis her due—she was already established as a pseudo-ally (at least to Steven) in her very first appearance, putting to rest the speculation that surrounded Jasper and Peridot; and the long game of the Malachite arc (in which almost all of Lapis’ character development was previously bound up) was the hardest hit by the show’s descent into nightmare scheduling, dragging out small clues and hints into an almost year-long breadcrumb trail. In this, I have been remiss. This episode is a wonderful reminder of Lapis’ unique potential as an addition to the cast.

The high point of the episode, literally and figuratively, is Lapis and Steven’s flight. Seeing them reestablish their friendly, joking rapport—which we glimpsed while Steven was in the mirror but has been overshadowed by danger and disaster ever since—is a crucial reminder for the audience after a season and a half away, while also giving us a chance to breathe in the wake of two enormous battles. It’s peaceful in a way the show hasn’t had a chance to be for a while, between encroaching Gem dangers on one hand and Peridot’s manic energy on the other.

The tour itself evokes the quiet awe of a Miyazaki film, looking down at warmly painted landscapes that, with the barest touches, evoke a vibrant sense of life (it shouldn’t surprise you to hear that this episode was written and boarded by Lamar Abrams and Katie Mitroff, the team behind the fairytale-esque “The Answer”). The background artists, whose watercolor vistas have always been important to the show’s feel, go above and beyond here to sell a sense of love that almost oozes out of the still images. And, on a more general note, it’s always nice to get a broader sense of how this Gem-scarred world developed (loooooooot of coast towns, aren’t there).

If there’s a complaint to be made, it’s that the revelation of Lapis’ backstory is almost a bit of a letdown. Constrained to the back half of the episode rather than a full-episode turn like “The Answer” or “We Need to Talk,” it seems to raise more questions than it answers: who decided it was a good idea to let Lapis vacation in a War Zone? Was she really part of Blue Diamond’s court, and if so, was this a political move? Who was the Gem who punched her (prevailing guess seems to be Bismuth, the bubbled Gem glimpsed in Lion’s mane)? Why did it take so long for Pearl to find the mirror, given that her outfit seems to be from around the era of “We Need to Talk”? Was Rose still alive when she did? In the long haul I’m absolutely positive these questions will be answered and that, when marathoned all together, this arc will form a cohesive whole; but right this second it’s another small fragment in a very long line of small fragments, and that can occasionally get a bit frustrating (especially after so long away, when the other Gems have all had big chances to either grow or tell a full-episode story about themselves).

Most of Lapis’ appearances to this point have been defined by her attempts to escape, which is what makes the ending of this week’s episode so exciting. Lapis’ sightseeing tour revealed how little she knows about much of anything. Even Peridot had reports to read, but Lapis only has what she saw from that mirror (she reads as quite young or sheltered prior to that point—seriously, who let her visit a war zone?). Her character holds great reserves of strength and vindictiveness alongside teasing playfulness and a deep yearning for connection to others. Where and when those competing traits overpower each other is a ripe place for conflict and development, as well as the question of who Lapis is when she’s allowed to think beyond the bars of her latest cage.

This also means that we’ll not only get to experience the expected painful things (like the almost inevitable reunion with Jasper and the emotional fallout from being Malachite in general) and the awkward things (Peridot, full stop) but real, uncomplicated joy in goofing off and getting to make friends with the human residents of Beach City. It’s really been too long since we’ve seen them after all.

But in the meantime … oh boy, Peridot. There’s certainly some history there – whether it extends beyond Lapis classifying Peridot as another one of her jailers (let’s not forget how willing Peri was to step on people below her in the pecking order), and what it will take for the two of them to overcome that and have any kind of positive relationship, remains to be seen.

Please let that business about a cool job and a wacky roommate be foreshadowing.

(Oh, and apologies for the titling hiccup last week—that’s on me, readers).

Vrai is a queer author and pop culture blogger; they are definitely still waiting to hear about Jasper, though. You can read more essays and find out about their fiction at Fashionable Tinfoil Accessories, support their work via Patreon or PayPal, or remind them of the existence of Tweets.