So ends the Summer of Steven. 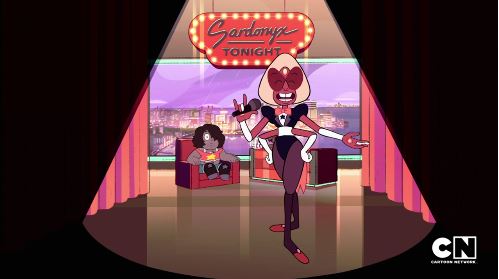 The Recap: When Steven and Amethyst reveal that they’ve fused, an ecstatic Garnet and Pearl fuse into Sardonyx and try to learn absolutely everything about the newly formed Smoky…unthinkingly stealing their thunder in the process.

Well, I can’t say I was wrong about the fanservice. But I wasn’t wrong about not minding, either. Fusions are such a rare treat that a chance to spend time with them, even if there’s not a strong driving plot at hand, is a great way to fill eleven minutes. It’s almost entirely a showcase for guest actors Alexia Khadime and Natasha Lyonne to show off their stuff, as well as a chance for the writers to get all their long-held meta jokes out by way of Sardonyx.

In fact, this feels like one of the show’s most reflective episodes, from the title on down. As fusion begins to become more of an integrated part of the show rather than a cool trick to pull out for a big climax, the writers have (or had, at this point – production schedules and all) to ask themselves who these fusions are as characters rather than just gimmicks; hence, “Know Your Fusion.”

The talk show is a great set piece for Sardonyx to show off, and the magic of the temple rooms makes things like the “courtesy of Cartoon Network” footage jokes feel organic to the magic of the place, if a bit uncanny (I know we’re the audience, but also the whole laughtrack “I created them” bit is a bit…brr. What DID Smoky see out there?).

The opening scene isn’t to be discounted so quickly, though; for one thing, it contains a metric ton of heartwarming, from Garnet’s utterly fantastic reaction to meeting the new fusion (props to Estelle for holding that scream a good 20 seconds) to the effective way the sheer size of both fusions is communicated against the mundanity of the house. It’s one of the few reminders we’ve had of how truly alien they are, and why – with their size and extra appendages – they might’ve originally been thought of as weapons.

And then Sardonyx takes over, and a good half of the running time is dedicated to glimpses of fusions past; everybody loves a callback, after all. And while she’s pushing Smoky to reveal something about themselves, we’re initially complicit in it. After all, that’s half the fun: what’s their weapon, how’d they combine, what’s unique about them. Lyonne is excellent at playing cowed in the face of Sardonyx’s enormous personality, and as we get a chance to watch them become a person as they try their best to live up to Sardonyx’s expectations.

As it turns out, there is a similarity between Steven and Amethyst that’s magnified in Smoky, and it’s obvious to us far quicker than Sardonyx: they love to make people laugh, to win the approval of the crowd; and that need seems to come from a profound sense of worthlessness. All Smoky can think to offer is their yo-yo, their ability in combat, because they don’t know what they have. But they’re initially very proud of that ability, until they realize it isn’t what Sardonyx wants. Then they lose footing and start trying to fit a different mold, and the self-deprecation comes out.

It’s understated and sad and real, particularly since Sardonyx is coming from a well-meaning (if self-centered) place. She doesn’t realize she’s stomping all over what Smoky’s worked so hard on…which, of course, doesn’t negate the effect she’s having. It’s quite a potent portrait of being a role model, unintentionally trying to cheer on what you think will make a child the best they can be, all the while ignoring the path they might be trying to explore. And it’s a mark in Sardonyx’s favor that she eventually realizes that she’s stolen Smoky’s moment in the middle of attempting to celebrate them. But even then, the really brutal lengths Smoky goes to in beating themselves down doesn’t seem to register, and it’s painfully obvious that they’re looking for someone to step in and say “no, that’s not true.”

It’s at least salved somewhat by Smoky getting to save the day, showing off their yo-yo like they always wanted – not just the tricks, but how versatile it is, even if people might not immediately see its value (just like them). When Steven declares that it’s a toy, it’s nicely in keeping with his role as a pacifist, helping to bridge from seeing fusions as combat-directed things to how they can exist in a peaceful way (which might’ve been what the Crystal Gems wanted, but 1000 years is a long time to start thinking of everything in terms of how it can be used to fight). Yup. Nice. That’s a good word for this episode. Alongside those glimpses of emotional trauma. So….pretty much primo Steven Universe.

And that’s the end of the Summer of Steven. Luckily for us, instead of another hiatus we’ll just be switching over to weekly episodes starting the 18th. And while it’s been great to get so much story all in one go, I gotta tell y’all that I am deeply grateful for the change. After 22 new episodes I’m kind of out of smart-sounding, coherent thoughts. So let’s all take a nice, coherent crash-nap together, and I’ll see you all back here next week. Take care of yourselves out there, and each other.

Vrai is a queer author and pop culture blogger; they have a lot of feelings about triangles, alright. You can read more essays and find out about their fiction at Fashionable Tinfoil Accessories, support their work via Patreon or PayPal, or remind them of the existence of Tweets.