Steven Universe Recap: Back to the Kindergarten | The Mary Sue

Steven Universe Recap: Back to the Kindergarten 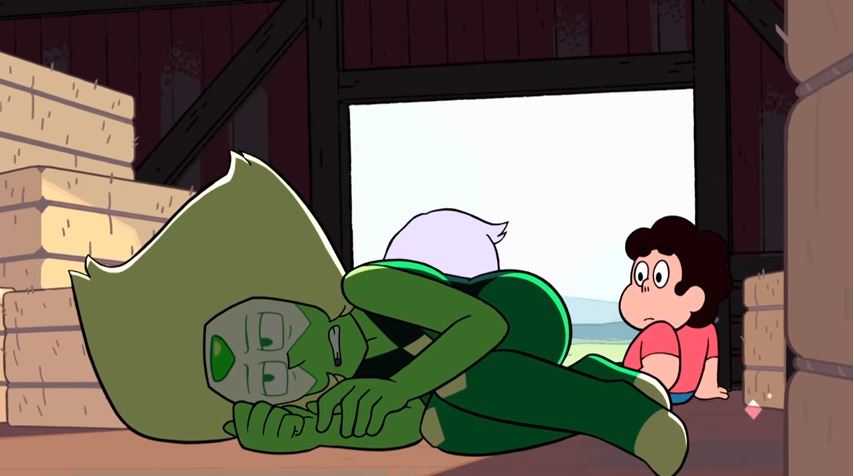 The Recap: Steven and Amethyst try to cheer Peridot up by taking her to the Kindergarten and letting her show off. Seeing a leaf growing there, they try to plant new crops and see if the soil revitalizes itself. It’s a disastrous failure, but Peridot resolves to try again someplace new (it’s a metaphor).

Hello pacing problems, my old friend. After the excellent and painful “Raising the Barn,” “Back to the Kindergarten” chucks us right into a fairly generic “getting over the ex” plotline that couldn’t have been more terribly timed. The problem is twofold: first, that SU’s historically lackadaisical pacing makes it jarring to create a complex emotional arc and then seemingly solve it in the next episode; and two, it seems to be pushing the audience to throw their investment in a long and slow-building relationship directly into the garbage and forget about it.

Most of these issues could’ve been solved by delaying a discussion of Peridot’s recovery. There’s nothing so special or unique in the “moving on” element of the story that it needed to be handled right this second (in fact, it’s kind of on-the-nose and trite), and taking more time to let things settle while focusing on other characters would’ve given the audience a break and allowed the story to land on Peridot’s need to keep living without feeling like it was slamming the door on Lapis.

Because wow, does the bluntness of the script do this one a disservice. So you’re saying this “land” is BARREN and DEAD and Peridot should move on to other fish in the—I mean, other farmland? And that when they tried to plant in the Kindergarten because they saw a pretty blue flower growing there, it turned out to be a blue monster (who else is blue?) actually being a monster that completely consumes Peridot?

Give me a minute, I think I have a concussion from that brick.

None of this is helped by the fact that Lapis leaving feels very clearly like setup for a dramatic return at a crucial moment. It’s a positively ancient trope: someone runs from a situation out of self-preservation but returns in the nick of time to save the person they walked out on, apologizing and declaring their devotion.

But beyond her relationship with Peridot, this move does a disservice to Lapis altogether. She’s an important character, one the show has explored most transparently as a survivor of multiple kinds of abuse, and to have this as the bow on her character for who knows how long (possibly as long as the climactic battle, whenever that is) feels disrespectful to her character. I praised “Raising the Barn” for exploring Peridot’s side of things while keeping Lapis’ spur-of-the-moment decision understandable, if still a jerk move. This kind of does away with that, given that “get over the ex” plotlines are naturally set up to make us root for one party while throwing rocks at the other.

It’s just a poorly thought-out episode, especially disappointing given that Mitroff and Villeco last produced “The Trial.” The moments of bonding between Steven, Peridot, and Amethyst (wow, how long’s it been since we got to really hang out with Amethyst?) are sweet and nice to see; rekindling those friendships feels like the primary impetus for the episode, and it’s definitely nice to have it back. Peridot’s monologue about how a mistake ruins things forever is also a compelling look into her character, a genuine continuation of what the prior episode was going for. And while Amethyst is a supporting player, it’s great to see her find new meaning in the Kindergarten now that she’s gotten to know other amethysts. There are good things here, but none of it feels worth the cost on the whole.

If that rebuilding of other bonds had come more slowly over time, or if we had some vague indication that Lapis would be coming back beyond a general understanding of how stories work, things might’ve turned out a lot better. As it is, the best episode of the run winds up followed by the worst.

At least next time we get to see more of Sadie.