Steven Moffat on Doctor Who Diversity | The Mary Sue

Steven Moffat on Diversity on Doctor Who: “It’s a Show That Has No Excuse.” 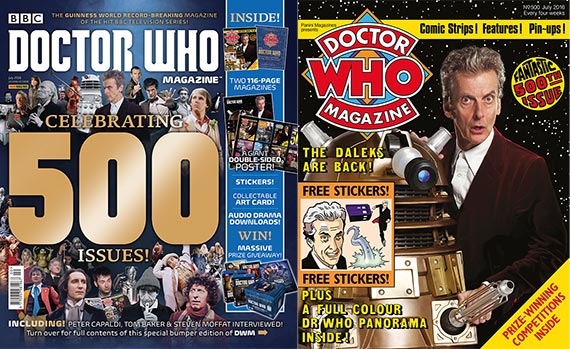 Doctor Who Magazine is currently celebrating its 500th issue with a special collectors edition that’s full of cool stuff, including an interview with Steven Moffat wherein he speaks honestly about diversity on Doctor Who, and about how even though the supporting cast has been one of the most racially diverse on British television, they could still do better.

As reported by Doctor Who TV, Moffat says that casting a black actress as the Doctor’s new companion was “an absolute decision, because we need to do better on that.” He says that even though Doctor Who‘s casts have been pretty diverse since the show returned in 2005—starting with Noel Clarke’s Mickey being the first black person to set foot on the TARDIS (and being a sort-of companion alongside Rose)—they could always do better. Indeed, there’s no excuse not to.

“Sometimes the nature of a particular show – historical dramas, for instance – makes diversity more of a challenge,” he says. “But Doctor Who has absolutely nowhere to hide on this. Young people watching have to know that they’ve a place in the future. That really matters.”

He made one really interesting comment that illuminates the mindset of someone with white privilege working on a television show. About the show up until this point, Moffat said, “I had this baffling idea that if we just threw open each part to everybody, it would all work out in the end. I put my faith, inexplicably, in the free market. It doesn’t work. You can only cast for talent – you’ve got to cast the best person, every single time – but you’ve got to gauge where you’re looking for the talent.”

So many well-intentioned people in the entertainment industry have that same notion: that it’s simply a matter of who is or isn’t auditioning, and then they’ll say that they “weren’t able to find” a certain race to play a role. Yet they look in the same places and don’t make it a priority to cast a wider net and go to where the people they want to find are. They don’t take things like barriers to access into account when they should, and I think it’s great that Moffat is recognizing that.

Moffat even talks about the idea he mentions above — the excuse of “historical accuracy” that some people often give to justify an all-white cast —  “[W]e’ve kind of got to tell a lie: we’ll go back into history and there will be black people where, historically, there wouldn’t have been, and we won’t dwell on that. We’ll say, ‘To hell with it, this is the imaginary, better version of the world. By believing in it, we’ll summon it forth.’”

And in case you were wondering, they apparently already have tried to cast a black Doctor. Says Moffat, “Absolutely it would [be refreshing if the next Doctor wasn’t white]. Two non-white leads in Doctor Who would be amazing. In fact, a lot of people would barely notice … I certainly don’t think there’s ever been a problem with making the Doctor black, which is why it should happen one day. I mean, we’ve tried. The part has been offered to a black actor. But for various reasons, it didn’t work out.”

Aaaaargh! Now I need to know who that actor might have been! Which black, British actor (or hell, any other actor of color) do you think would make a great Doctor? Or actress of color, for that matter!