Pearl Mackie Will Be The New Companion on Doctor Who

The BBC broke the news today. 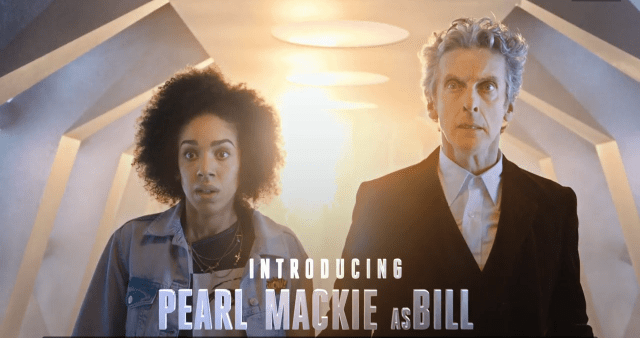 The BBC teased the news yesterday that a new Companion would be stepping into the sexy blue box known as the TARDIS alongside Peter Capaldi’s Twelfth Doctor for a whole new set of adventures–and now, it’s been officially confirmed which actor will be assuming the long-standing role as the Doctor’s new Companion. You can watch a clip of Pearl Mackie as Bill in a scene with Capaldi below:

Mackie most recently performed in the stage adaptation of the novel The Curious Incident of the Dog in the Night Time at the National Theatre’s West End. Rumors of her casting on the show had been swirling around ever since it was reported she met with Capaldi recently–and it looks like now it’s official!

The concept of Doctor Who has always been fascinating to me. The mythos of the Doctor’s regenerative capabilities is one of the most creative ways I’ve seen of bringing new actors in to the role of the Doctor–pretty much ensuring that the Doctor will live on in perpetuity given that almost anyone could play him (or her–because if I’m being honest, I really hope the show gets at least one female Doctor before its run is over). And, of course, each incarnation of the Doctor is just a little bit different from the one before it, with each actor bringing something different to his interpretation of this much-beloved character.

Now, it’s time for Mackie to join the franchise that has been populated with so many terrific Companions and Doctors in the past–and I am psyched about her arrival! What are your feelings on this announcement, and how do you envision this new relationship between the Doctor and his new Companion playing out?