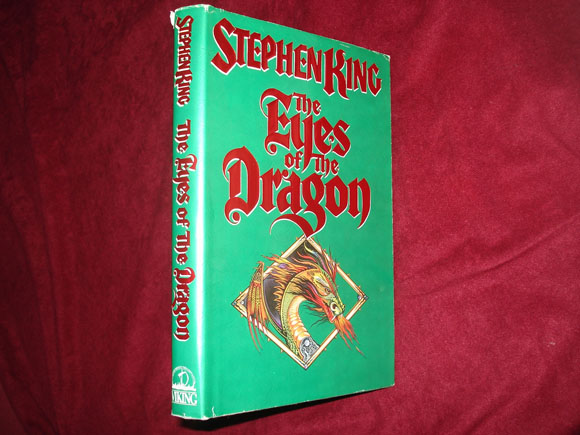 Stephen King’s 1987 fantasy novel, The Eyes of the Dragon, may not be his most famous work but it’s one of his best in my opinion. I always thought it was prime material for a movie adaptation, what with it’s dragons and evil wizards. Now, it looks like I might finally get my wish. Syfy has optioned King’s book for a film or mini-series.

The novel, which was actually first published as a limited edition hardcover in 1984 by Philtrum Press, was certainly a departure from King’s usual horror fare. Although, one of its main characters, Randall Flagg, has shown up in several of his other books.

But I’m getting ahead of myself. The news itself is that Syfy has picked up King’s novel for a longform project. That means it could either be a film or a mini-series. Entertainment Weekly reports that Michael Taylor (Battlestar Galactica) and Jeff Vintar (I, Robot) will adapt the novel for the screen as well as executive produce.

They write, “A stand-alone novel that hasn’t been previously adapted into a live-action feature. In fact, among King’s pre-1990 books that were first published under his own name, only his fantasy titles (Eyes of the Dragon, The Talisman and the Dark Tower books) haven’t yet been adapted, though all have been in development at one point or another.”

The Eyes of the Dragon takes place in a land called Delain where a young prince named Peter is framed for murdering his father. Meanwhile, the King’s magician (Flagg) weaves an intricate plot to secure power for himself and Peter’s younger brother Thomas is caught in the middle. The novel features illustrations by David Palladini that could make for a great jumping off point for production.

You may be worried that a channel who produced such films as Sharktopus and Mega Shark vs Crocosaurus are adapting this beloved work but Syfy have already tweeted at film critic (and big fan of The Eyes of the Dragon) Scott Weinberg, to say the film, “would not be done as a Saturday night movie.” Sounds promising then. Weinberg himself is staying positive, “Everybody wants their own #gameofthrones. @Syfy landed a fantastic Stephen King novel that could become theirs.”

Are you a fan of the book? What do you think about the news? I’m still a little scared but I’m hoping Syfy really puts their weight behind the project and hits a home run.