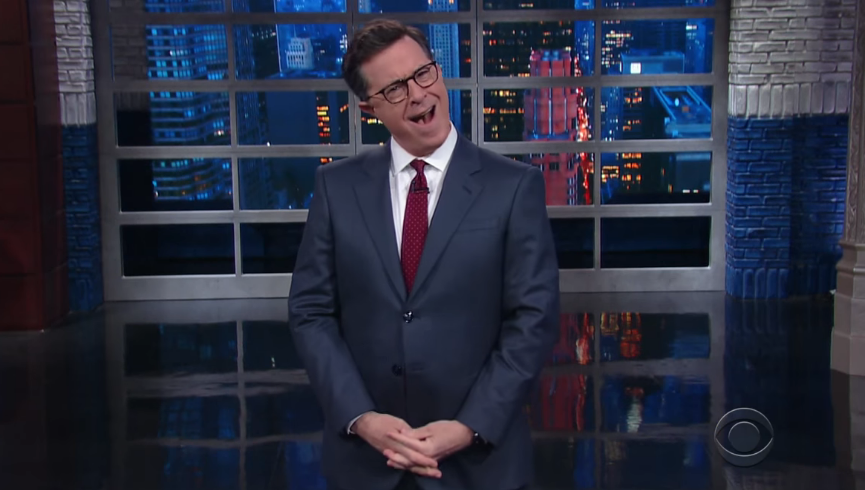 Over the weekend, Donald Trump gave a series of interviews and, as usual, they were all bizarre. From his musings of who knew the Presidency could be so hard? to who even knows why the Civil War happened? Sad!—I’m paraphrasing—there was a lot to take in (or block out).

Among the most bizarre interactions, though, his CBS This Morning interview with Face the Nation’s John Dickerson ranks high. To start with, Trump rambled off a slew of fact-checkable misinformation. (Thanks to the Daily Beast for doing that point-by-point fact checking.)

Trump also showed Dickerson around the Oval Office and showed him the red button on his desk that famously gets the sitting President a Coke (“or a Pepsi … it gets you something”). He says he likes to “have fun with people” by pretending it’s the nuke button. At least, that’s presumably what he does; he got distracted and started talking about chairs before the end of the sentence.

After talking about sodas, chairs, and his post-inauguration “difficulties” with President Obama, Trump abruptly ended the interview. Dickerson asked Trump if he stands by his claims of wiretapping and that Obama is “sick and bad.” Trump responded, “I don’t stand by anything … You can take it any way you want.” Dickerson insisted he didn’t want to be “fake news” and that he wanted Trump’s own point of view. Instead, Trump waved him away with an “okay, that’s enough,” and walked back to his desk. You can watch the whole totally bananas segment here.

In another segment, Trump lumped Dickerson in his hatred of mainstream media, saying he liked to call his show “Deface the Nation.” Get it? Instead of Face the Nation? So clever! What wit!

You know who had zero patience left for these meaningless insults Trump flings at anyone he views as having the potential to be his critic or “enemy”? Stephen Colbert. Colbert is done with Trump’s lazy, misinformed vilification of hardworking, respected journalists. He opened his show Monday night by talking directly to Trump.

“Donald Trump, John Dickerson is a fair-minded journalist and one of the most competent people who will ever walk into your office, and you treat him like that?” He goes on to say,” Now, John Dickerson has way too much dignity to trade insults with a president of the United States to his face.”

Lucky for us, though, “I sir, am no John Dickerson.”

The puns he hurls back at Trump aren’t all spectacular, but then again, the insult he’s matching (“Disgrace the Nation”) is a low bar to clear. He tells Trump, “Mr. President, I love your presidency, I call it ‘Disgrace The Nation.’” He says Trump isn’t the POTUS, “you’re the ‘gloat-us. You’re the glutton with the button. You’re a regular ‘Gorge Washington.’ You’re the ‘presi-dunce,’ but you’re turning into a real prick-tator.”

“Sir, you attract more skinheads than free Rogaine,” he went on. “You have more people marching against you than cancer. You talk like a sign-language gorilla that got hit in the head.” His big finish: “In fact, the only thing your mouth is good for is being Vladimir Putin’s c*ck holster.”

He also recreated Dickerson’s interview with Trump, and honestly, if you showed me the transcripts of both this and the original, I’m not sure if I could tell which is real.