These Awesome Guitars are for Steampunk Rock 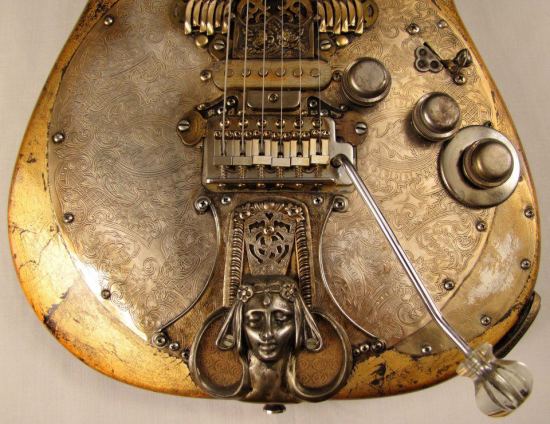 If you’re devoted to someday living an entirely steampunk life, there’s good news to be had; you can still have a guitar. Tony Cochran has taken upon himself the selfless endevour of bringing steampunk guitars into the world, and they are beautiful. Naturally, you might be wondering if they still work, and the answer is a resounding yes. They make good art pieces, but can still rock out.

Part of the beauty of electric guitars, and electric instruments in general, is that their sound is derived chiefly from their components, your pickups and bridges and amps and such. That being the case, bolting things onto an electric guitar is a little less questionable than say, gluing them to an acoustic.

Cochran has a pretty large collection of guitars, 17 in total, most of which are still looking for a home. They’re not the cheapest guitars, but then again, would you want them if they were? The average price floats around $1,500 or so, which is pretty stellar for such a striking, original guitar. Oh, and bassists, fear not, there’s a few of those as well. Be sure to hop over to Cochran’s site to check them out for yourself, there is plenty to drool over.