Hatred, A Game About a Serial Mass Murderer, Has Been Banned From Steam Greenlight 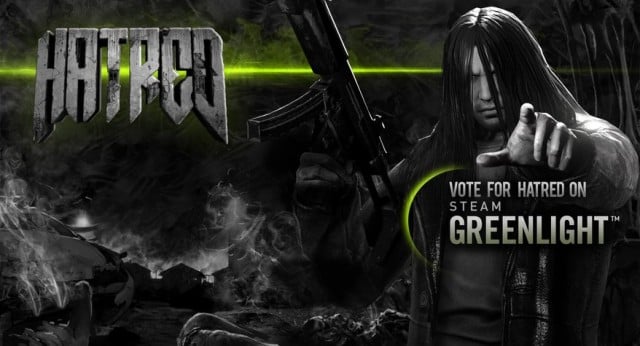 Hatred‘s trailer made waves earlier this back in October for being… well, pretty disturbing (here’s a link, but know that it’s incredibly violent before you click). Basically, it’s about a serial mass murderer who goes on a ‘genocidal crusade’ against innocent civilians because he hates the world—you know, every goth middle schooler’s dream! But now the game’s getting attention not for its hyper violence, but for getting banned off of Steam Greenlight.

Steam Greenlight is a service that allows users to select what new games will be offered for purchase on the online game distribution network. Developers are encouraged to submit their own games with a video, screenshots, and a written description of the game’s system requirements, and from there users can vote on which games they’d actually want to buy from Steam. After a few hours, Hatred‘s Greenlight campaign had already gotten 13,148 votes and made it to #7 on the list of all Steam Greenlight games, which under normal circumstances probably would have gotten it greenlit.

But these aren’t normal circumstances this time around, as Steam owner Valve made the executive decision to remove the game from Greenlight entirely.”Based on what we see on Greenlight we would not publish Hatred on Steam,” Valve told the developer, a Polish company called Destructive Creations. “As such we’ll be taking it down.” 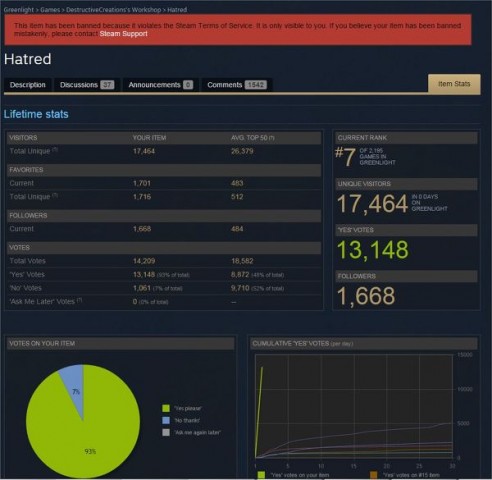 Hatred had already seen its fair share of backlash, of course. Epic Games, maker of the Unreal Engine that the isometric shooter uses to run, denounced the game and requested that their logo be removed from the trailer. Rumors also began to circulate that the Destructive Creations CEO Jarosław Zielińsk had Neo-Nazi sympathies, which he vehemently denied (his argument: that he’d liked an infamous Polish hate group’s Facebook page because of their Middle East news, and didn’t actually know what else they were up to beyond that).

But the game still has an overwhelming amount of supporters who’ve latched onto the political goals of the game, as outlined in a statement on the Destructive Creations website (note that English is not their first language, all sic): “These days, when a lot of games are heading to be polite, colorful, politically correct and trying to be some kind of higher art, rather than just an entertainment – we wanted to create something against trends. Something different, something that could give the player a pure, gaming pleasure.”

“Herecomes our game, which takes no prisoners and makes no excuses,” the statement also adds. “We say ‘yes, it is a game about killing people’ and the only reason of the antagonist doing that sick stuff is his deep-rooted hatred. Player has to ask himself what can push any human being to mass-murder.”

Now, as in the case of Target Australia, Valve is legally entitled not to sell a product if it so chooses, and the situation is much more complicated then just out-and-out government censorship—it’s instead about the moral and political values that Valve has a company, and what their actions may or may not do to reflect or even influence the values of society at large. Things are especially stickier here because Steam practically has a monopoly on the digital games marketplace, which does actually have the potential to impact the game’s bottom line. It’s also worth noting Steam Greenlight also has a reputation for allowing in all sorts of technically broken and underdeveloped games, and for banning games that have overtly sexual themes in them. Arguably, Hatred falls under neither of those categories.

However, the people behind Destructive Creations are more than happy to respect Steam’s decision—after all, as they said on their website in response to the ban, it’s been getting them a lot of attention.

Even though games like Manhunt or Postal are still available on Steam we of course fully respect Valve’s decision, as they have right to do so. In the same time we want to assure you that this won’t in any way impact the game development, game’s vision or gameplay features we’re aiming for. The game is still to be released in Q2 2015 as planned.

Moreover we don’t treat this as a failure because yet again this showed us a huge community support we’re totally overwhelmed with.[…] This is the best proof for us that there are diehard Hatred fans out there waiting for this game to be released. And that we need to keep going to deliver them a game that offers exciting and challenging gameplay.

The whole situation only pushes us forward to go against any adversity and not to give up. It also makes us want to provide our fans Hatred pre-orders sooner, as many of you have asked for them.

Destructive Creations will be approaching GOG.com next, and will offer Hatred directly from their website regardless of what happens with the online game retailer. Somehow, I feel like the game won’t have a problem finding its audience.