Is This The ‘Steam Box?’ — Detail Light, Valve Branded “Piston” Debuts At CES 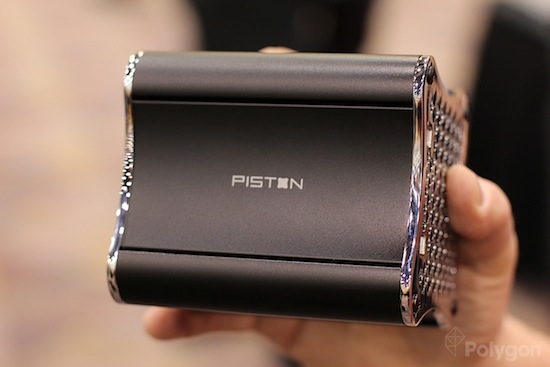 This morning brought some eagerly-awaited details about Valve’s upcoming foray into the console/set-top box gaming world from the company’s apparent partner on the so-called Steam Box, hardware manufacturer Xi3. The company, which specializes in tiny, high-performance PCs was on hand with a Valve-branded piece of hardware known for the moment as ‘Piston.’ What else do we know about the little box that might be Valve’s inroad to living rooms across the nation? Precious little, for now.

The prototype, which is small enough to fit in your hand, boasts an ethernet port, four USB 2.0 ports, four USB 3.0 ports, four eSATAp ports, a 1/8″ audio jack, SPDIF optical audio, a pair of Mini Display ports and a full-sized HDMI output, which covers the many things you will one day be able to plug into it.

As for what sort of performance you’ll be able to get out of it…that we’re going to have to wait on. It’s still in the development stage, so we won’t know what the box looks like on the inside for a little while, though Xi3 representatives told reporters that the specs are based on their top of the line X7a series of computers. One thing that was confirmed was that the machine will be customizable and upgradeable, an idea that sits very well over here, as the idea of being able to breathe new life into an old console with some minor upgrades is a very nice one to us. Reps were also canny about pricing on the machine, so we can mark that down under the heading’ Known Unknowns’ for right now as well.

If CES gets a look at this little guy in action sometime this week, we’ll be sure to let you know. For right now, cautious optimism is our watchword, as this looks like it could be a neat new addition to the home entertainment center if the price is right. Oh, who are we kidding — as long as it lets us play Half Life 3 at some point, we will buy this thing, and we will do it happily.