Did Your State Try to Crack Down on Protesters This Year? They’re Likely to Try Again. 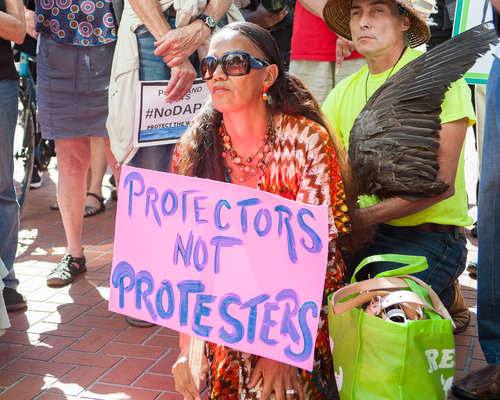 A new report from State Innovation Exchange looked at trends in state legislatures across the U.S., from voting rights to workers’ protections to healthcare, and it identified one of many disturbing trends in Republican-controlled legislatures: laws meant to penalize and curb protests.

(State Innovation Exchange is aligned with the Democrats, so read it with that bias in mind, but most of the information about these bills can also found on the state legislatures’ own websites.)

The United Nations also released a similar report back in April, urging that the bills in question “are incompatible with international human rights law and would unduly restrict the possibility for individuals to freely exercise their rights to freedom of opinion and expression, and peaceful assembly.”

The states addressed in the United Nations report include the below. Many of these states only attempted to pass dangerous legislation, and the bills either died in the legislature or were vetoed. However, if you see your state on the list, it’s worth reading what your representatives tried to do – because they’re likely to try and pass something similar again.

These bills are insidious because they’re often crafted to attack a specific type of protest that’s been successful in the region or state.

For example, all across the U.S., Black Lives Matter protests have blocked highways everywhere from Tennessee to Texas to Minnesota. Many of the states involved neighbor Arkansas. And so – although Arkansas governor Asa Hutchinson vetoed a more toxic bill that targeted “mass picketing,” citing his concerns about violating people’s constitutional rights – Arkansas passed a revision to its laws about loitering, specifically targeting anyone who “lingers or remains on a sidewalk, roadway, or public right-of-way, in a public parking lot or public transportation vehicle or facility,” or “under circumstances that create a traffic hazard or impediment.” Language like this is clearly aimed at demonstrations like the Black Lives Matter protests.

(Minnesota’s legislature tried to enact a similar crackdown, after the Philando Castile protests, but it was vetoed by Governor Mark Dayton.)

Oklahoma, on the other hand, was facing the possibility of its own version of the Dakota Access pipeline protests due to the planned Diamond Pipeline, which will pass through Native American lands. And so their legislature wrote a bill which criminalizes “trespassing on property containing a critical infrastructure facility without permission” as a misdemeanor. If a court finds that the “trespasser” was on that property in order to “impede or inhibit operations of the facility,” they instead face felony charges and a minimum $10,000 fine. Perhaps most insidiously, the law also allows the state to charge any organization that’s “found to be a conspirator” with this act of trespassing “ten times” the fine paid by the individual.

These are just some of the examples, and I urge you to check out the U.N report if your state’s on the list. (Or even if it isn’t!)

I know there are a million things to keep up with the national level, but watch out for your state legislature, too. They’re often the ones who can take away your very right to protest the national-level problems.

(Via USA Today and CNN; image via Shutterstock)