The State of the Resistance Against Trump, According to NY Attorney General Eric Schneiderman

"There's no door number two that brings you back to normal." 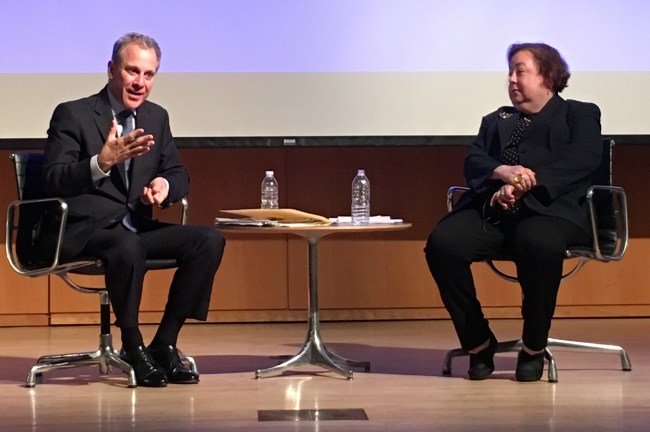 Sometimes the surest defense against despair is to listen to those who are wiser in the ways of the world. Last week, I saw New York State Senator Liz Krueger interview Attorney General Eric Schneiderman on the current state of the resistance. Both are experienced, passionate and adept advocates for progressive causes and legislation, and both have been vocal in their opposition to Trump. Here’s what I learned we should be afraid of—and what should help us sleep at night.

Attorney General Schneiderman has a long and storied history with Donald Trump—he’s the man who went after Trump University on charges of fraud (which resulted in Trump paying $25 million to those he defrauded). Schneiderman has seen Donald Trump’s character up close and personally (let’s just say his contempt for Trump was so alive it was like a third person on stage).

An uncompromising champion of equality and anti-corruption, Schneiderman is a blisteringly intelligent speaker, with the kind of confidence that comes from knowing you have the law on your side. He makes you want to write down everything he says—I filled up several pages. Here’re the highlights of my notes and takeaways, distilled:

However, for all that many of us dream of a Trump impeachment that somehow fixes everything broken with our administration, our country, and our relations with the world, here Schneiderman had an extremely important perspective to share. Mike Pence would be “no ticket to paradise,” as a man who acts like the Spanish Inquisition. “There’s no door number two that brings you back to normal,” so we must keep doing the substantive work to build a local base to fight back.

“We will work our way through this,” Schneiderman assured us, which is the first time I’ve felt better about Donald Trump being President in a long time. But in order to do so, all of us need to be working hard to create a collective movement for equality and justice. We can’t just vote and go home—America was not intended to function that way, “we’re not built like that.”

Instead, we must “stay aggressive,” Schneiderman said. “This is what we were designed to be.” Knowing that there are such accomplished and dedicated public servants fighting every day against Trump, but requiring our aid and input to succeed, has fired me up anew.

TL;DR: Organize locally, be vocal for your marginalized friends, insist on equality, keep those who represent you accountable, stay aggressive: these are the best ways we can resist right now. There’s no doorway back to normal that we do not construct for ourselves.