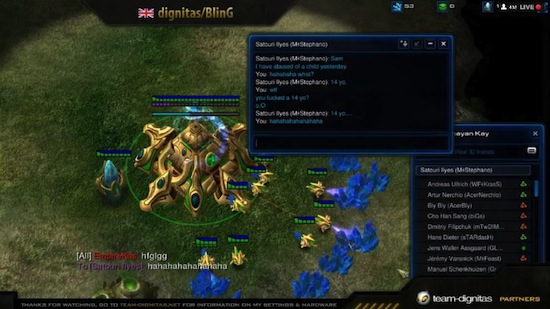 We have to face facts, people. The internet is a social place: Even if there’s no one else in the room with you, people will see the things you say online and you are accountable them. For example, if you don’t want people to think you’re a sex offender, don’t talk about having sex with children. A player from professional Starcraft II squad Evil Geniuses is learning that lesson the hard way. Ilyes Satouri, A.K.A. Stefano, has been suspended by his team after saying he molested a fourteen year-old boy during a publicly streamed in-game conversation.

During a game last week, Satouri sent a message to Team Dignitas’ Samayan “BlinG” Kay, saying; “I have abused of a child… 14 YO.” Confused, Kay asked Satouri if he was serious, so he repeated that the person was 14 years old. No one is saying that it’s easy conveying a sarcastic or joking tone in an online chat, but the comment is completely deadpan. There’s no reason to think that this guy wasn’t serious… Or just insane. We all agree that there’s nothing funny about child molestation, right?

Taking the comments to heart, or at least realizing that this could go very wrong, Evil Geniuses are suspending Satouri without pay until November 1st: He will miss at least two professional tournaments, the GD Invitational and DreamHack Bucharest, over the incident. Since the incident, Sautori has apologized on Twitter, claiming that the comments were a private joke, and that the incident is a misunderstanding.