Remember When Starbucks Wanted Their Baristas to Start a Conversation About Race? Well, Mission Accomplished 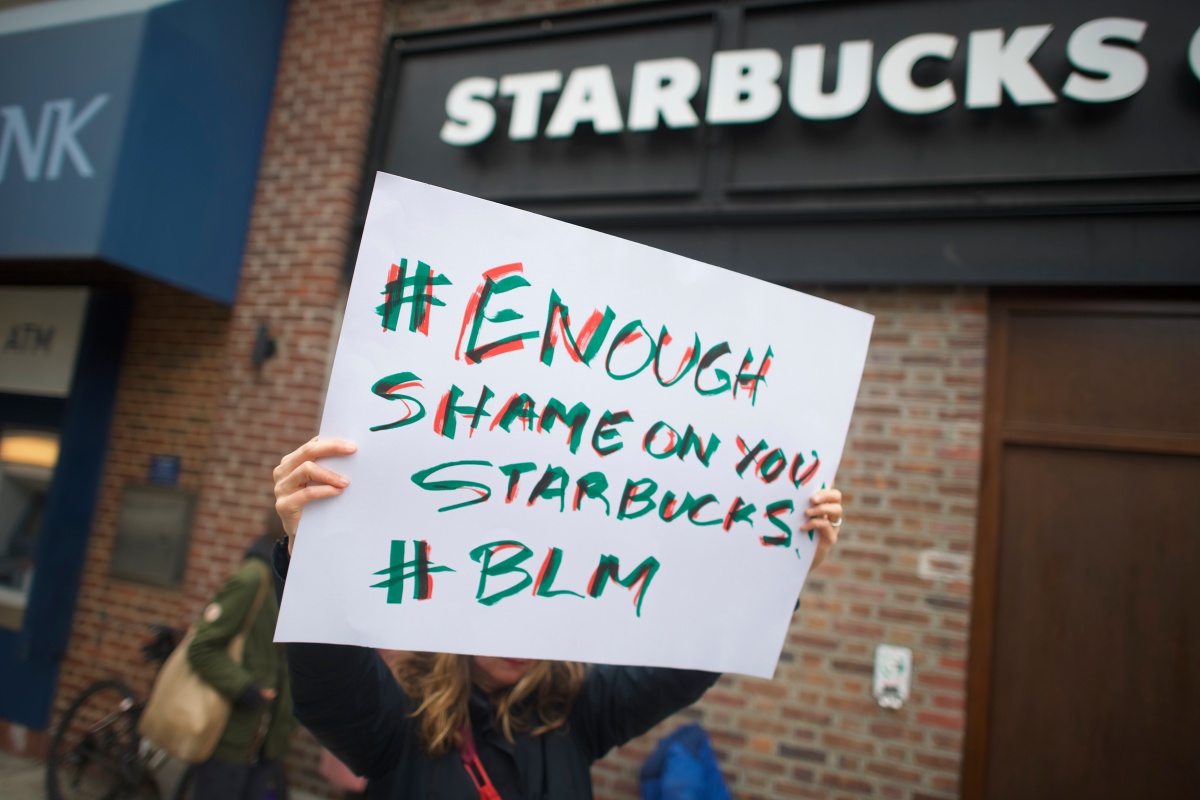 PHILADELPHIA, PA – APRIL 15: Protestors demonstrate outside a Starbucks on April 15, 2018 in Philadelphia, Pennsylvania. Police arrested two black men who were waiting inside the Center City Starbucks which prompted an apology from the company’s CEO.

Cell phone footage over the weekend captured two black men being arrested inside of a Starbucks in Philadelphia for the 200-year-old crime of doing something while being black.

The two men were waiting inside the coffee franchise for a friend of theirs when they were approached by a manager for not ordering anything, after attempting to use the bathroom. The manager asked them to leave and they said they were waiting for someone. The manager then called 911 for assistance, as reported by the Washington Post.

The men were then taken out of the store in handcuffs by at least six officers, all while the people in the coffee shop captured the friend of the two men coming into the Starbucks, seeing the incident taking place and asking: “They were waiting for me … what did they do?

The outcry had been overwhelmingly in defense of these two men because this is the rare clear-cut case of racial profiling caught on video. Not to mention the two men remain calm as they engage with the police, the loudest person in the altercation is the man they were waiting for, Andrew Yaffe.

Yaffe, according to the attorney for the two men, Lauren Wimmer, runs a real estate development firm and wanted to discuss business investment opportunities with the two men.

When Yaffe arrives and sees the men arrested he immediately confronts the police: “Why would they be asked to leave?” Yaffe says in the video. “Does anybody else think this is ridiculous?” he asks people nearby. “It’s absolute discrimination.” To which another woman off-camera says, “They didn’t do anything.”

When Yaffe suggests that they go somewhere else the officers say they are not free to leave because they didn’t leave when they were first asked. The two men stand up to be cuffed, without resisting, and were taken to the police station where they were fingerprinted, photographed and held for eight hours before the district attorney said there was no evidence of a crime and released them.

Melissa DePino, who recorded the incident, told Philadelphia magazine the men did not intensify the situation. “These guys never raised their voices. They never did anything remotely aggressive.”

For the past few years, Starbucks has tried to be a liberal-leaning company, even when it could seem a little silly; their intentions were in the right place from the top level, so it is even more unfortunate that a racist employee has decided to taint their good efforts.

To those who may want to say this is not racist, you really have to put blinders on. As someone who worked for a Barnes and Noble Cafe for two years, we would constantly have customers who came in from the main bookstore without buying anything from out cafe just to sit down. As long as we had room for other, paying, customers, we didn’t heavily enforce our no purchase, no sitting policy.

CEO Kevin Johnson issued an apology saying, “The circumstances surrounding the incident and the outcome in our store on Thursday were reprehensible, they were wrong. And for that, I personally apologize to the two gentlemen who visited our store.”

As of right now, the employee who called the police was not fired but only moved to a different franchise, which has called into question for some the legitimacy of Johnson’s apology.

Except the men were not disturbing anyone, save for a manager who was feeling twitchy about two black men in his store who were sitting without paying. Despite there being white customers who were there without paying as well, according to the witnesses. There is not even any indication that they were there for a long period of time. I would hope that when two men are sitting down waiting calmly for someone at a Starbucks, the police would have some sense of waiting and seeing if something more extreme was going on before making an arrest.

So Starbucks has succeeded in having a conversation about race, with some help from the Philadelphia police.

The two men, who have chosen to remain anonymous, did “everything right” in a situation in which they were targeted and harassed for doing something people do in restaurants, bars, etc. every day. My only hope is that this incident further illustrated to people that when POC are talking about experiencing micro and macro aggression because of their race, it’s not in our heads.