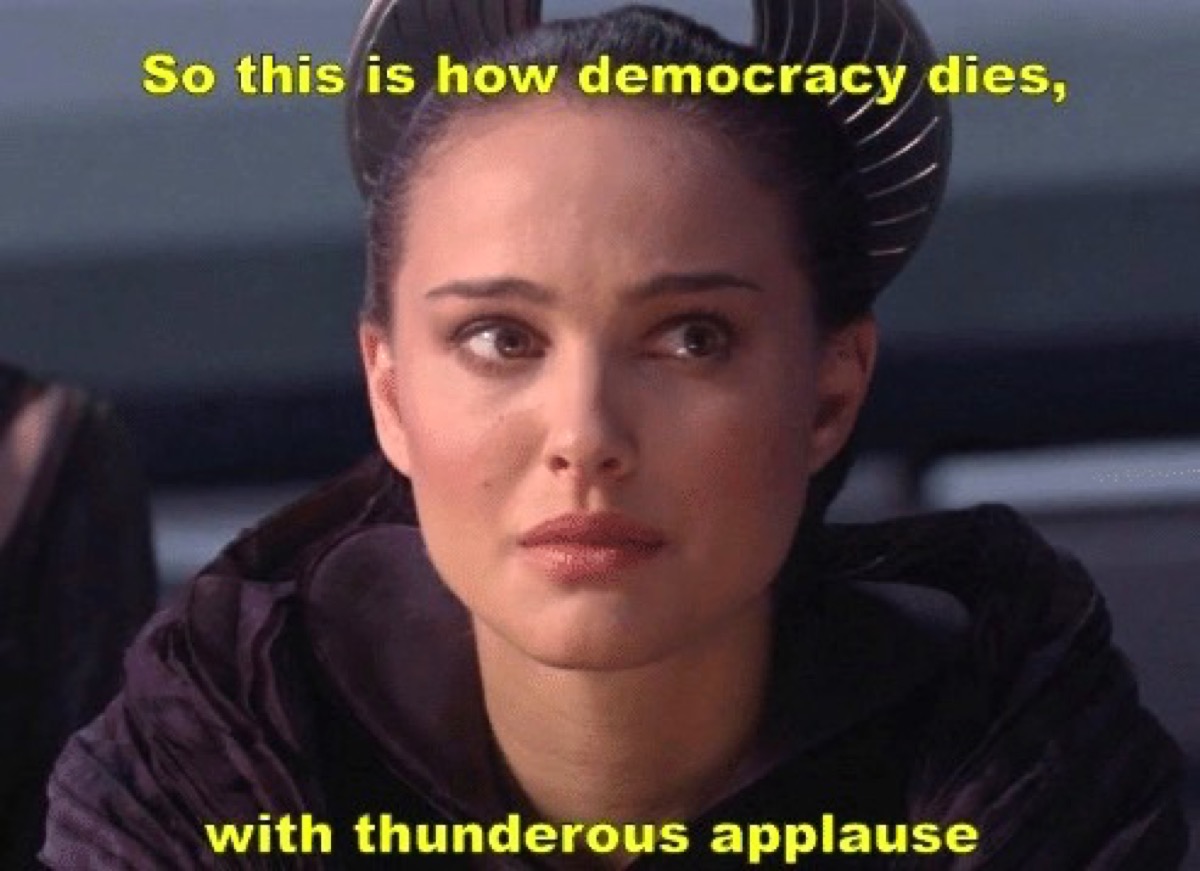 In yet another installment of Ted Cruz Doesn’t Know Pop Culture, he decided to try to talk about Star Wars again and aged me 10 years in the process. At this year’s CPAC, Cruz took to the stage to suddenly act like he doesn’t know why masks are important in a pandemic and to scream “FREEDOM” for an extended period of time.

But then he decided to bring up Gina Carano and the Star Wars universe, and I slowly started to rip my hair out of my head.

“This is the rebel alliance,” says Cruz. “Vader and the emperor – and let’s be clear, they’re not your father – are terrified of the rebels that are here. And I’m telling ya, Gina Carano stands with us!”

So here is a message for the children of the Republican ideology: Stop thinking you’re the rebels. You’re supporting people who uphold fascist ideals. Enjoy the knowledge that you’re the Empire.

Star Wars helped to teach so many of us how to look at fascism as it was growing and gaining power and learn which side we wanted to fall on as children. I grew up wanting to be Princess Leia because I didn’t want to see the fascist leadership of people like Palpatine taking over my real-life world. Granted, this was information I understood at the age of 8.

Somehow every single right-wing nutjob who watched Star Wars seemed to take the wrong messages from the series and also apparently never opened a history book in their lives.

But I’m going to keep this simple for the right-wing fans who seem to think they’re anything like our rebels. Star Wars made the bad guy people like Donald Trump. By supporting those same ideals, you’re supporting what the Empire stood for and fought to uphold. The rebels are those who want freedom and happiness across the galaxy, to be free of the hold that the Empire had on them.

The way Republicans want to control the bodies of women or oppress BIPOC? How they believe their ideas are the one true way? That’s the Empire. They deal in absolutes. You’re all supporting the Sith.

Is that easy enough for you to grasp? Sorry, you’re all following Palpatine and his rule.

I would love nothing more than for Republicans to forget Star Wars exists. Since you are incapable of watching this series through an adult lens and understanding the themes that George Lucas started to build the series with, you shouldn’t be able to talk about it. In fact, it’s not even fair to compare Republicans to the Sith and the Empire and not because it’s unfair to Republicans. It’s unfair to the Sith! At least they can sometimes redeem themselves. Republicans are a lost cause.

Republicans have constantly just spread hatred and stupidity throughout our galaxy and it’s time, for me, to put my foot down. You idiots are not going to take Star Wars away from me and if it means I get to make fun of Ted Cruz and how he’s incapable of understanding a film franchise meant for children, then so be it.