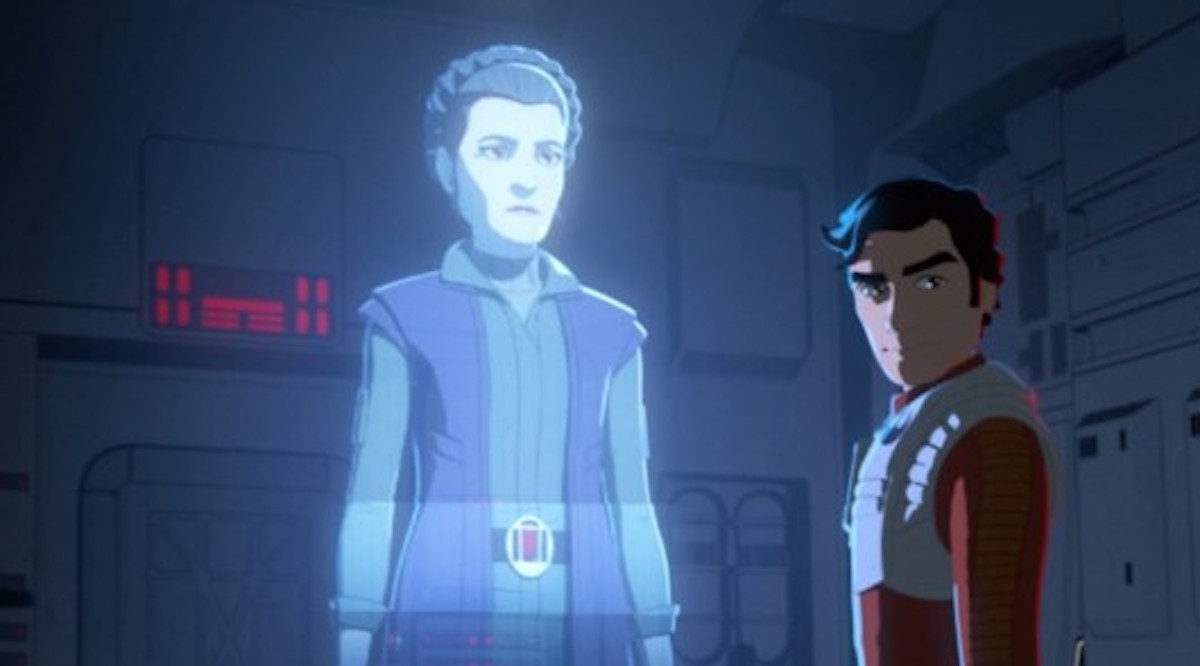 Can I bend your ear for a minute? I need to tell you a story about Princess Leia Organa of Alderaan, and another story about myself. If you’re going to voice Leia, you need to know what you’re getting into.

When I was 12, I was sexually assaulted. I’ll spare you the details, but it was not unlike what happened to Dr. Christine Blasey Ford. The first time, I was terrified. The second time, I decided never to cry one tear in front of my assailants, never to let them see that they’d hurt me. It’s a little dramatic, but I was 12. To protect myself, I shut down emotions that have never fully grown back. I had always been a writer, but for the remainder of sixth and seventh grade, I couldn’t think of a single story. I didn’t tell a soul for ten years.

When I was 14, I discovered Star Wars, and with it, Princess Leia. She was fierce and beautiful and tiny, and I thought, You know what? I could be that. I watched The Empire Strikes Back over and over again that summer, rewinding the VHS tape to one moment on Hoth, the moment she looks up at Han just before he tells her that he’s about to leave.

You know the one? Leia is exhausted and alone, but she’ll do her job if it kills her. She looks at Han without a word, and that expression contains a lifetime of weariness. The first time I saw it, something clicked for me. I thought, She knows. She knows what it’s like to be thoroughly beaten and keep going anyway. She knows what it’s like never to give them the satisfaction of one single tear. And she fights.

I braided my hair in a crown around my head. I picked up a pen and one of those cheap spiral notebooks that go on sale at Target every summer. I started writing terrible Han and Leia fanfiction, and I haven’t stopped writing since. And I never, ever backed down from a bully.

Leia saved my life. She was a role model for survivors of abuse and assault before these things were regularly discussed in public, and she was the only role model available in my world of parentally curated media. Did you know that in A New Hope, Leia is drugged and tortured aboard the Death Star? Sometimes people don’t really pick up on that, but it happens.

Darth Vader tortures her, and she doesn’t turn over a shred of information. Finally, he’s forced to admit defeat. To my mind, that means the Empire has already tried every kind of torture available. Then, her entire planet is destroyed in front of her, everyone she has ever loved wiped out—but only after Tarkin plays a mind game that must make her think she’s responsible for its destruction. Feel this pain, Princess? This is your fault. You brought this on yourself. You could have just given us what we wanted willingly.

It’s really no wonder survivors identify with her.

Did you know that, in Return of the Jedi, she’s stripped, dressed as a sex slave, and chained by the neck to a creature who then sticks his disgusting tongue in her face while laughing at her? Remember the part where she strangles him with her own chain? That was fantastic, wasn’t it?

This is my Leia— 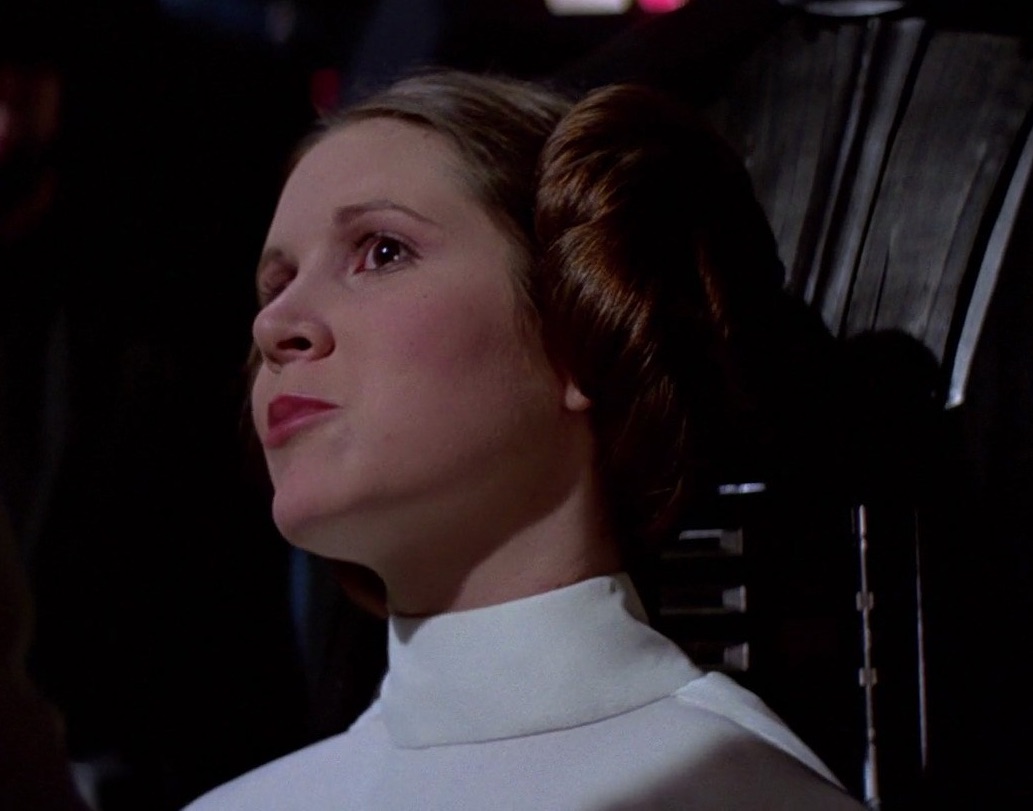 —hopelessly punching above her weight, facing a galactic government that wants her silenced and incapacitated, five-foot-one and staring up at monsters without an ounce of fear. Look at that chin tilt—everything about her says, “How dare you?”

My Leia suffers torture and ruin, endures the destruction of her family, so that she can protect the rest of the galaxy from a corrupt and evil galactic government. And although we don’t know what she feels in private, she does not allow herself to break.

She’s not really so different from Dr. Blasey Ford.

When Star Wars became a worldwide blockbuster, Carrie Fisher’s life was changed. Mostly, I think it was not changed for the better, but whereas Harrison Ford and Alec Guinness have rolled their eyes at this embarrassing celebrity, Carrie was nothing but gracious. She never expressed annoyance when excited fans called her by her character’s name. She poked fun at herself. She used her fame as a platform to help other people who suffer from mental illness. She was real, she was compassionate, and she never backed down. Carrie did not have to be the guardian of Leia’s legacy. She chose to embrace that role because fans told her that we needed her.

So, yeah, I saw your video, where you mimicked Dr. Blasey Ford’s voice. I’m not quite sure what you were thinking, but it was in pretty poor taste. As an actor, I’m sure you’re aware of how comedy works: never punch down, only punch up. If you are laughing at someone in pain, you’re not funny—you’re a sadist.

I’m sure that, as a vocal actor, you’re also aware that fear and tension cause muscles in the neck to contract, which leads to a voice pitched higher than usual. Although the causes of vocal fry are many, it is also a phenomenon experienced under stress. I’m sure you can understand Dr. Blasey’s stress—as she stated, she was terrified. She testified before a whole nation. Some of the people listening to her want her discredited, and others want her dead, and yet, she has the courage to speak out, even at the cost of personal ruin.

We, Leia’s fans, are furious with you. Many are calling for you to be fired. Personally, I’m not in favor of firing people for expressing views that are not illegal. You’re not inciting a riot or threatening anyone. You just said something really, really crappy, and God knows I’ve mocked people I think are terrible, though I dare say I never punch down.

Your performance was a blip on the radar, just another voice in this week’s chorus of naysayers, but hearing your voice coming out of Leia’s lips does not sit right with me. Unlike Carrie, you stepped into this role knowing her cultural significance. Nobody forced you to wear that mantle. If you’re going to be Leia, then be Leia—fight for people who have less power than you. Feel empathy. Stand up to injustice rather than perpetuating it. If you cannot do these things, or if you do not care for this responsibility, then please find a different job.