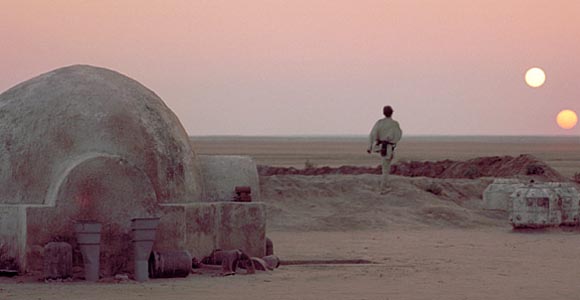 Who can forget the ingloo-type dwellings Luke Skywaker lived in with his Uncle Owen and Aunt Beru in the original Star Wars film? Well a long time ago, in a galaxy far, far away…actually it was just over 35 years ago, in a remote area of Tunisia…George Lucas had the exterior of their home built and left it there. Now one man is making it his mission to preserve the historical film site from deterioration and he’s getting a lot of help from fellow Star Wars fans.

The interior of Luke’s home was actually the Hotel Sidi Driss, built partially underground Matmata, Tunisia. Parts of the set from the film still exist at that location as well but it’s the exterior of the fictional dwelling one fan was concerned about preserving.

Mark Cox, a 35-year-old insurance salesman from England, has spent the last two years trying to fix and preserve the site. It all started when he and his wife Sarah were married there back in 2010.

“Upon seeing the poor condition of the building, the pair set up set a Facebook group and started collecting donations to repair it,” according to the Norwich Evening News 24. “Within a year, 425 donors gave amounts ranging from $1 to $600 apiece to build a $11,700 fighting fund.” 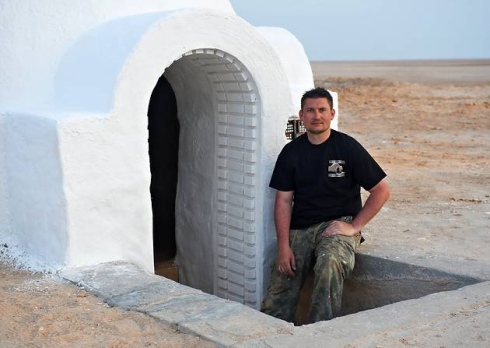 “It was the hardest thing I’ve ever done in my life,” said Cox. “But it was so humbling that people had trusted us with the money to do the work, and that they so wanted to help us.”

A group of six traveled to Tunisia to perform repairs along with Tunisian natives. They filmed the entire project in order to create a short film they will later sell on DVD to help fund repairs down the road. They’re also working on a book.

Cox said the emptiness of the area is captivating. “It really feels like you are actually there in the film, and when you watch the sun set it is amazing,” he said. “Now that we’ve done the work, we hope people will be able to go there and have those memories again.”

This is such an amazing story. I’m a huge fan of a lot of movies, TV, etc. but I’m not sure if I have it in myself to do what Cox and company did. What I’m really surprised about though is, why hasn’t Lucas done something to preserve these sets previously?