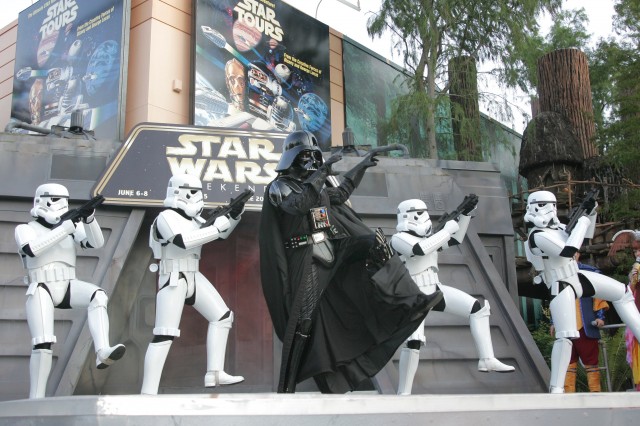 I’m not an expert in Star Wars GIFs, but I sure have seen a lot of them, and there’s one unusual pattern that I noticed a few years ago: What’s with all the dancing Star Wars characters???

I’m sure you’ve noticed it, too. If you search for a GIF of any Star Wars character and add the word “dancing” to the end of your search, chances are very high that you’ll find a live-action GIF of someone in a highly professional costume, dancing on a stage, often alongside other Star Wars characters. You might be wondering, “Where do these GIFs come from? What event is this? Why has this dance event resulted in hundreds and hundreds of high-quality Star Wars dancing GIFs, all of which are wildly out-of-character, but hilarious? How many dances could there possibly be with these characters? Is there just an infinitely increasing supply of Star Wars dancing footage, being uploaded somewhere, by someone?”

YES. Yes, there is. And it’s not going to stop.

The event in question is Disney’s Hyperspace Hoopla Star Wars Weekend Dance-Off. It’s a recurring event with skits and goofy performances, and the dance-off portion of the event has been going on for at least a decade running. The earliest video I can find of a dance-off at the event is from 2006, so I’m pretty sure that’s when it started, but who knows?

There are years full of videos like this one, online. That one’s only a couple minutes long, probably because it was one of the first years of the event, so it’s not as big of a show. In subsequent years, the Dance-Off becomes truly spectacular. These days, videos of the event run up to about 30 minutes long—which, even for me, is a really long time to be watching Star Wars characters do different dances in succession. But, I have watched a lot of them, because that’s the kind of person I am, and I’m here to tell you that they are hilarious and great and GIF-worthy.

The characters don’t just dance to one song, either. I mean, with a 30-minute run-time, there’s got to be a LOT of dance performances happening. So, every single Dance-Off helpfully serves as a time capsule of sorts. These videos are not a time capsule to, say, the time period in which Star Wars was made. Of course not! Instead, they’re more of a time capsule to the top-40 hits from whatever time period the Dance-Off occurs. Just, as an example, the 2009 Dance-Off features Padme lip-synching Katy Perry’s “Hot and Cold” in Darth Vader’s face. Remember that song? I didn’t! But now I do!

Then again, sometimes the songs used don’t necessarily have anything to do with any particular time period, let alone have anything to do with the character who’s dancing to them. In 2012 performance, Emporer Palpatine dances to LL Cool J’s 1990 hit, “Mama Said Knock You Out.” I don’t think that performance would’ve made any more sense in 1990 than it does in 2012. Here’s an example of … that.

I guess I should note that the dances vary wildly in quality, probably due to the difference in abilities in the dancers, plus the limited mobility of some of the costumes. When Padme’s wearing her white battle costume, for example, she’s got plenty of mobility—but in her stately Senatorial robes, she can’t do much more than lip-sync. In the 2009 performance, she wears her full regalia, but in later years, she usually sticks with the white outfit, probably because it’s easier to dance in.

What’s really weird is that, occasionally, the choreography calls for some pretty sexy dance moves to unfold with both Padme in her ripped white battle costume and also Leia in her slave outfit. This is a total timeline error, people! These two would NEVER be dancing together! And certainly not with Chewbacca!

Of course, there’s also Leia giving a sexy come-hither motion to Boba Fett. So, like, no one ever said this would be in-character. It’s really, really not. It’s fan-fic, in dance form.

I gotta admit, though, I’m genuinely into all of the Padme/Vader dances. They get to do some sort of tango-esque performance almost every year, and it’s usually fantastic. I already mentioned 2009’s Katy Perry dance between the pair, which was less of a dance and more of a lip-sync skit. Since then, their dances have only gotten better. In 2012, they did these cool moves to a remix of Adele’s “Rolling in the Deep.”

And in 2013, the pair danced to Taylor Swift’s “I Knew You Were Trouble.” I love the pushing-away choreography here:

For reasons beyond my understanding, Darth Vader’s solo dances are nearly always set to a Michael Jackson song. In past years, Disney’s chosen “Thriller” (refer to the image at the top of this post), as well as “Bad” (seems obvious), and “Smooth Criminal” (uh, nope, can’t explain that one). For that reason, whoever’s in the Darth Vader needs to have the moves, in spite of the limited mobility provided by the costume.

And that Boba Fett ain’t bad, either.

But, my personal favorite has to be Darth Maul. He’s not a huge character in the series, so he doesn’t usually get a big dance sequence. But, he’s got a lot of heart, you know? He’s just … he’s so happy to be included.