Here’s Where You’ll Be Able To Find The Ending To Star Wars: The Clone Wars 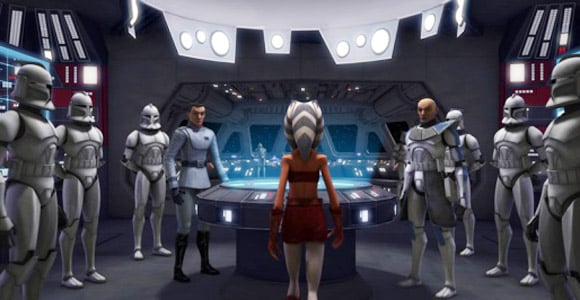 When the Lucasfilm acquisition happened, Disney decided to end Cartoon Network’s Star Wars: The Clone Wars in order to kickstart a new animated series on Disney XD, Star Wars Rebels. “But what about Clone Wars???” we shouted! You’ll be happy to know the series will be getting an “end,” just not how you expected.

When the fifth season of Clone Wars ended on television, that wasn’t the traditional “the end” moment. Creators still had material set to go but no one was sure where it would end up, if it went anywhere at all. Fans hoped the episodes would at least be added to the DVD release but it never happened. The good news? We will see more of what they intended to air. The bad news? It won’t be animated or on television.

Speaking with Newsarama, writer Jeremy Barlow gave details on a forthcoming comic book which would fill the gap. “Due to the Star Wars: The Clone Wars TV show’s sudden cancelation, Lucasfilm wasn’t able to film the final episodes of the series, which is a shame because the story is an important — and action-packed — chapter in Darth Maul’s continuing evolution as envisioned by George Lucas,” he said. “Never ones to let a good story slip away, Dark Horse and the team at Lucasfilm saw an opportunity to save these teleplays from obsolescence and we’re adapting them into a four-part miniseries called Darth Maul: Son of Dathomir.”

Over the weekend we reported on Dark Horse losing their Star Wars license to Marvel (for obvious reasons), but this seems like a nice send off. Though I’m sure there will be others before the 2015 cutoff. About the comic project, Newsarama also noted, “This doesn’t preclude the fully produced episodes from still airing somehow, but does let fans jump right to the ending and the unproduced final arc.” My hope? They put together a motion comic with the original voice cast.

[Edit: According to Club Jade, Lucasfilm’s Jennifer Heddle and Pablo Hidalgo have clarified the Darth Maul arc was not, in fact, the finale, just a story close to it.]

In other news, Lucasfilm and Disney are busy working on a “story group” to help figure out what’s official canon out of the estimated 65 billion Star Wars creations in the universe. “Story Group has a hand in all facets of Star Wars storytelling, including movies, TV, games, and publishing,” wrote Leland Chee on Twitter. “More so than ever, the canon field will serve us internally simply for classification rather than setting hierarchy.”

Our sister site, Geekosystem, explains a bit more. “Not an Expanded Universe fan? To put it simply, there are different hierarchies of Star Wars canon – G-canon is the movies, radio plays, and official statements from George Lucas, which up until now have overridden any contradictions in canon. Then there’s the T-canon, which consists of the Clone Wars TV show and the upcoming live-action show. After that is the C-canon, which consists of all the comics, books, and games, with some exceptions in video gameplay that are considered N- or non-canon — for example, if you played a female Revan in Star Wars: Knights of the Old Republic, that’s N-canon, because in all other stories Revan is male.”

Bottom line? This is a really good idea.