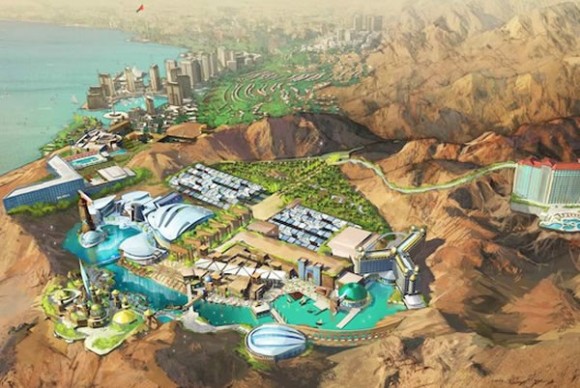 It’s always fun to find out about the geeky predilections of public figures, like the discovery that Jordan’s King Abdullah is a Trekkie. A serious Trekkie. As in, King Abdullah’s fundraising arm is donating money to build a Star Trek theme park and resort in his country. CBS, Paramount, and Amman’s Rubicon Group Holding (which makes animated films), are all on board to design this thing. And it’s only going to cost $1.5 billion. It’s good to be the king!

Actually, according to Randa Ayoubi, the chief executive of Rubicon, that’s mere pocket change compared to what is spent to build even bigger parks like Disney World and Universal Studios, and would only be able to cover licensing fees. So this 74-hectare (183-acre) attraction is comparatively tiny. (Walt Disney World in Orlando takes up over 30,000 acres, including all the resorts, transportation, and all four parks.) And unlike its more gigantic cousins, this project — called The Red Sea Astrarium — will require less visitors a year to make a profit (only 480,000 rather than millions upon millions).

Rubicon is said to be developing the “entertainment aspects” of the park, and it appears that it will be partnering with Paramount Recreation and CBS Consumer Products — which owns Star Trek — for creative development on attractions such as a planned “space flight adventure,” which is promises to deliver “a variety of multi-sensory futuristic experiences … that takes real-time immersive entertainment experiences to bold new heights.” The park and resort will also include restaurants, hotels, theaters, and shops. However, the entire resort will not be 100% Star Trek-themed; in an effort to promote tourism to Jordan, there will also be informative elements about Jordan’s history.

The park is projected to open in 2014, but let’s seriously return to the subject one of the resort’s biggest investors and acknowledge how excited and enthused he must be about this project. Back when he was still a prince, King Abdullah made a cameo on Star Trek: Voyager:

Indeed, there he is, in a non-speaking cameo role. (Non-speaking because despite his royal status, King Abdullah was not a part of the Screen Actors Guild.) And now he’s helping to build a Star Trek theme park. Guys: the King of Jordan is a proud geek.

(Time, The National via Geeks Are Sexy)