Star Trek: The Next Generation Is Coming To A Theater Near You! 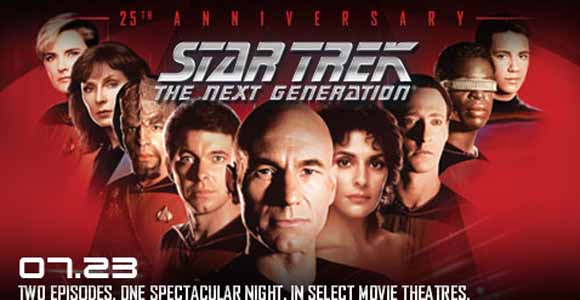 To celebrate the impending release of Star Trek: The Next Generation Season 1 on blu-ray (and the 25th anniversary of the show), NCM Fathom and CBS TV are holding a special theatrical event for one night only. Trekkers will get the chance to go where no one has gone before…to watch TNG episodes in a movie theater!

Ok, I’m very, very excited about this. Not only am I a huge Trek fan, TNG is my favorite series. On July 23, select theaters will be screening two episodes of the show, episode 106 – “Where No One Has Gone Before” and episode 114 “Datalore.” You can find participating theaters broken down by state on this list.

According to the press release, the event will have more than just two episodes. “This special event will include exclusive looks at the massive restoration of season one, never-before-seen interviews with the original cast members and behind-the-scenes looks at the artists who created the original FX elements and photography during the making of the show. Audiences will also be privy to an unseen sneak-peak of ‘Measure of a Man.'”

Tickets go on sale next Friday, June 8 and although most of the theaters will be showing the episodes starting at 7 p.m. on July 23, some will also host additional late night showings. The Season 1 blu-ray goes on sale the next day.

I think I’m going to try and attend although Season 1 was hit or miss. If attendance is good at this event hopefully they’ll do the same when the following seasons are released and I would kill a Klingon to be able to watch “Genesis” from Season 7 on the big screen.

Here’s a look at the updated visuals in the blu-ray release: