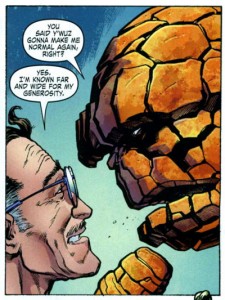 I never gave it a thought. I guess common sense would say it was made of orange rock too, but I always thought it was more interesting to think about Reed Richards. As you know, he had the ability to stretch, and sexually, that would seem to be a great asset in many areas. But I’ve got to tell you a funny thing about Mallrats… In the movie, I gave some relationship advice to Jason Lee’s character. I told him that I had a girlfriend from my past that I wasn’t able to forget either. I went to the premiere of Mallrats with my lovely wife, and when we came home later that night, she had her hands on her hips and her eyes narrowed, and she said, “Who was this girl in the past that you haven’t forgotten?” I told her, “Honey, that was the script. I was just reading my lines!” I have to be very careful about the roles I play in movies from now on.

– Smilin’ Stan Lee, in response to the question “Is the Thing’s dork made out of orange rock like the rest of his body?” Seriously, though. Vanity Fair‘s interview with him is great, you should read the whole thing.