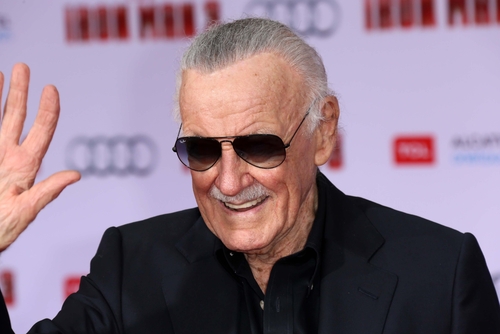 Marvel Comics icon Stan Lee has been accused of groping and sexually harassing the nurses who are employed to care for him at his home. According to a report in The Daily Mail, 95-year-old Lee is alleged to have “repeatedly groped and harassed a string of young female nurses employed to care for him. He is said to have asked for oral sex in the shower, walked around naked and wanted to be ‘pleasured’ in the bedroom.”

A source told the Mail: “[Lee] doesn’t seem to care what people think of him, he’s lost his filter. There has been a stream of young nurses coming to his house in West Hollywood and he has been sexually harassing them. He finds it funny … He’s also very handsy and has groped some of the women, it’s unacceptable behavior, especially from an icon like Stan.”

Lee’s road manager, Max Anderson, has also been named by the Mail‘s source as an alleged accomplice. “Max is a big guy and some of the nurses are scared of him,” said the source. “They have accused him of intimidating them and say a lot of the sexual harassment has gone on in front of him, like some boys’ club.” According to the Mail, Anderson has previously been criminally convicted of beating his wife and his son.

The source for this story is admittedly the infamous Daily Mail, so you are allowed to take the allegations with a grain of salt. It’s The Daily Mail. However, a representative for the nursing company reportedly confirmed that the owner has “received several complaints” from nurses who’d worked at Lee’s house, and Lee has since switched nursing companies.

Lee’s lawyer Tom Lallas also reportedly sent a cease-and-desist letter to the owner of the nursing company on December 20, accusing the firm of making “defamatory” statements claiming that Lee “sexually harassed one or more of the Nurses who has provided Services at the Lee home.”

Lallas also gave a statement to The Daily Mail which confirmed that allegations had indeed been made. “Mr. Lee categorically denies these false and despicable allegations … We are not aware of anyone filing a civil action, or reporting these issues to the police, which for any genuine claim would be the more appropriate way for it to be handled. Instead, Mr. Lee has received demands to pay money and threats that if he does not do so, the accuser will go to the media.”

As Inverse writes, these allegations against Lee are complicated and ugly, but should not be summarily dismissed due to the outlet that first reported them.

It’s important to take these allegations seriously. The Daily Mail isn’t the most reputable outlet, but accusations of sexual misconduct are too complicated and serious to write-off because of the news source. Many of the “holes” in the story, for lack of a better word, aren’t so much failures of reporting as they are symptoms of how delicate these issues are, and how hard it is to come forward with allegations against a powerful man.

[…] None of this is to say that Lee is guilty, without a shadow of a doubt, As mentioned before, false allegations are rare, but they do exist. This is just a sad (and sadly necessary) reminder that sexual assault allegations are complicated and gravely serious, and that fans of the Generalissimo shouldn’t be so quick to dismiss the charges these women have reportedly leveled against Lee.

High-profile women have been the center of the #MeToo and TIME’S UP movements, but it’s undeniable that women in more vulnerable, less prominent roles also face harassment—and with fewer resources to combat it. Home care nurses are particularly vulnerable, since they work in a person’s home, and they deserve to be heard just as much as wealthy actresses.

(Via Inverse, CBR and The Daily Mail; image: s_bukley/Shutterstock)