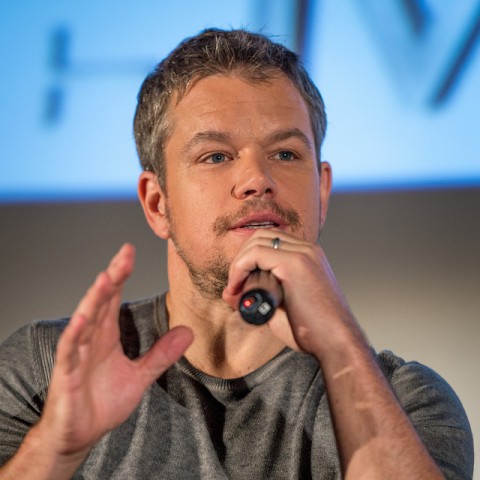 Perhaps Matt Damon should take his own advice and just stop talking, because it seems like the more we get to know him, the more ignorant he seems, despite his Harvard education.

I didn’t think it was possible for Damon to put his foot deeper in his mouth than he already had with his misguided, misinformed comments about diversity on the first episode of this season’s Project Greenlight, but I was clearly wrong. In a recent interview with The Guardian doing press for his upcoming film, The Martian, he decided to express some less-than-knowledgeable opinions about playing gay vs. being gay in Hollywood. When talking about his role as Liberace’s lover in the HBO biopic Behind the Candelabra, he went on to comment on being openly gay in Hollywood, because he clearly has so much lived-in experience to back up his comments:

When Ben and I first came on the scene there were rumours that we were gay because it was two guys who wrote a script together. It’s just like any piece of gossip… and it put us in a weird position of having to answer, you know what I mean? Which was then really deeply offensive.

Now, I get that press scrutiny is difficult for anyone – particularly when the gossip mill starts churning. However, the gossip mill is a problem, because it generally spews things that aren’t the truth. Damon could’ve stopped there, but he went on to use that as a springboard to talk about actors who actually are gay and what they should do with their lives:

I don’t want to, like [imply] it’s some sort of disease – then it’s like I’m throwing my friends under the bus. But at the time, I remember thinking and saying, Rupert Everett was openly gay and this guy – more handsome than anybody, a classically trained actor – it’s tough to make the argument that he didn’t take a hit for being out.

I think it must be really hard for actors to be out publicly. But in terms of actors, I think you’re a better actor the less people know about you, period. And sexuality is a huge part of that. Whether you’re straight or gay, people shouldn’t know anything about your sexuality because that’s one of the mysteries that you should be able to play.

Sure, blaming your gay friends for coming out as opposed to the society that would penalize them for it is totally not throwing your gay friends under the bus. I can’t believe that, in 2015, someone would remain so ignorant about basic human rights and civil rights.

Damon says that “whether you’re straight or gay” people shouldn’t know anything about an actor’s sexuality. So, does he think that people knowing he’s straight harmed perception of his performance in Behind the Candelabra? Or does he just trust in the fact that people think he’s a great actor? He goes out in public with his wife, and talks about her publicly, and when people assumed he and Ben were totally gay for each other back in the day, he got “offended.” So really, though he says “whether you’re straight or gay,” he really only means that gay people shouldn’t be open about their sexuality. And that’s a problem.

It seems that straight privilege, much like white privilege, is a huge blind spot for Damon. At the very least, his celebrity allows us to see ignorance in action, so that we can know it when we see it, and be prepared to fight against it when moments arise.

(via Raw Story; Image via NASA HQ Photo on Flickr)