The lack of self-awareness is astonishing. 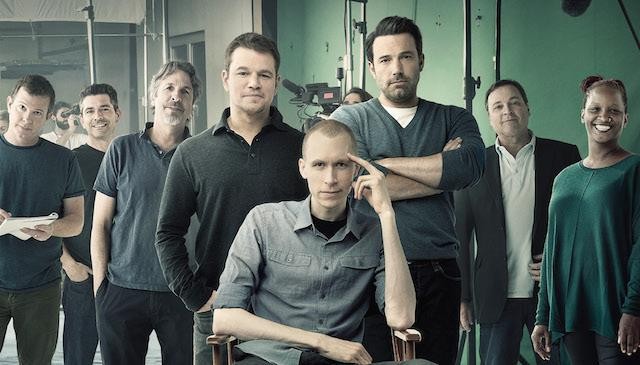 Project Greenlight was created to give filmmakers who otherwise might not have a chance to break into Hollywood a chance to make a film with guaranteed financing and distribution. It was designed to level the playing field so that you wouldn’t have to “know someone” to get your foot in the door. Producers Matt Damon and Ben Affleck have even said that this was something they wished they’d had when they were starting out.

Season 2: Had a mostly-male, all-white judging panel (and one white female – the President of Miramax at the time, Meryl Poster) selecting a winning writer and a winning director; white female writing winner, white male directing winner

So, going exclusively by the judges and eventual winners of the previous three seasons of Project Greenlight, the one time that they had a female winner was the one year they had a woman included in the judging, and with only white people judging, only white people have ever won Project Greenlight. It’s very interesting that in the first three seasons of the show, the winners reflected the panel of judges, particularly when the show purports to offer the winner a real Hollywood experience. Part of that experience, it seems, is that white people in power will relate to and see themselves in other white people and give them opportunities.

This history makes what happened on this week’s Season 4 premiere of Project Greenlight all the more disappointing. This year, the genre is comedy, and the winner(s) would receive the chance to direct a film written by the Farrelly Brothers called Not Another Pretty Woman. The film needs work, and so Pete Jones (winner of the first Project Greenlight) has been brought on as a writer to punch up the script, and the director would have to assist with that as well. First, check out this exchange between Matt Damon and fellow Project Greenlight judge, Effie Brown (producer of Dear White People), when she brought up the fact that 1) the film that they’re developing, written by the Farrelly Brothers (two white guys), is a comedy starring a black prostitute, so 2) it has to be handled carefully so as not to fall into Stereotype Land, so 3) part of what should go into making the decision about who should direct the film is who will be able to handle the material with that kind of care. Seems reasonable and film craft-related, right? Well, check out how Matt Damon responded:

Matt Damon speaking over the only black person in the room so he can explain diversity to her is SO WHITE it hurts pic.twitter.com/iaQStYZ0ij

So, basically, according to Matt Damon, diversity only matters when it comes to casting. Never mind that actors rarely have control over how the story they’re in is told. This exchange happened because Brown thought highly of directing team Leo Angelos & Kristen Brancaccio (a Vietnamese guy and a white woman) who were awesome when pitching in the room, and she thought that these already competent filmmakers deserved extra consideration, because as an ethnic minority and a woman respectively, they would give the script a kind of care that a white male might not.  But then, Damon proceeded to talk over her as you see in the clip above. Now, there’s another white woman in the room during all of this – Jennifer Todd, President of Damon and Affleck’s production company, Pearl Street Films. And she said that she, too, was concerned about the prostitute character. One of the Farrellys expressed the same sentiment, and a lot of the folks in the room nodded, but Damon proceeded to deny that anything other than “merit” should be involved in making their final decision. In his “confessional-style” interview portion during the segment containing this exchange, Damon had this to say:

I’m glad Effie flagged the issue of diversity for all of us, because film-making should throw a broader net, and it’s high time for that to change, but ultimately if suddenly you’ve changed the rules of this competition at the eleventh hour, it just seems like you would undermine what the competition is supposed to be about, which is about giving somebody this job based entirely on merit. Leaving all other factors out of it. This is strictly a film-making competition.

This statement shows a mind-boggling lack of self-awareness, and is problematic on so many levels.

1) “This is strictly a film-making competition.” No it isn’t, and it never has been. From the beginning of the series, Project Greenlight wasn’t just about film-making skill, it was about access. The whole point of the show is to give filmmakers who wouldn’t ordinarily have a way in a way in. So, diversity as criteria more than falls in line with the purpose of the show. What’s more, it should’ve been more of a conversation on the show in its earlier years. Even more laughable is that, in its first season, Affleck and Damon talk about how they wish something like Project Greenlight were around when they were starting out — as if they were filmmakers who might not have had access otherwise. Well, clearly they created access in that they got here.

However, even a cursory look at their lives before Good Will Hunting shows the privilege from which they each benefited. Affleck was a child actor, so he was making connections in the entertainment industry from an early age. Damon, meanwhile, went to Harvard, where he wrote the story that eventually became Hunting. They both are the children of New England money who were able to attend a private high school, had the luxury of being able to pursue their artistic dreams without worrying about sustaining themselves while also having access to influential people throughout. They were not the filmmakers for whom a contest like Project Greenlight exists. Then again, maybe they were – that is, if they created Greenlight for filmmakers like themselves, then it’s no wonder that the winners and most of the contestants also benefit from white, or male (or both) privilege.

2) “Giving somebody this job based entirely on merit.” Really? Entirely on merit? Well, assuming that your ten finalists didn’t consist of nine ass-clowns and one superbly talented filmmaker, one can assume that all of the finalists have “merit.” They made it this far, because you enjoyed their films and what they brought to the table artistically. The reason why you do things like have interviews is to look for the criteria that go beyond merit. And here’s where “what the competition is for” becomes more abstract. The winner is going to receive the chance to direct a real Hollywood film that will actually be seen by people. They will be participating in the real-life entertainment industry. So, a big part of the judges’ decision I’m sure has to be “What kind of film-making community do I want?” “Who do I think has a chance at succeeding in this business long-term?” The choice of a winner here goes well beyond mere “merit,” and the fact that Damon would so completely dismiss that – and dismiss it from a successful black female film-maker, no less – goes to show exactly what he may think the answers to those questions are.

Also, that statement – “the best person for the job” – inherently implies that you think that if a person of color or a woman is chosen, they couldn’t have possibly been the best for the job. If anyone other than a white person wins, it’s automatically suspect. However, what rubbed salt in the wound beyond this instance of “Damonsplaining” was who the eventual winner ended up being. The appropriately named Jason Mann, a white, male director whom EVERYONE on the panel had reservations about (the Farrellys thought him pretentious; everyone commented on the fact that he wasn’t even interested in directing this movie, and would only talk about how everything about it needed to be changed in order for it to be worthy of his artsy sensibility – that several judges argued wasn’t even appropriate for a broad comedy) ended up winning the opportunity afforded by Project Greenlight.

So, Season 2 remains the only time in which a woman has won Project Greenlight, and the show continues to strike out when it comes to contestants of color. Even better? The second Mann’s win was announced at the Project Greenlight announcement party, he pulls Affleck and Damon aside and tells them that he wants to change writers and that he insists on shooting on film. So, his entitled ass was commended by Project Greenlight, and now he feels free to start making big demands literal seconds after his win was announced. The frustrating thing is that Damon, Affleck and Company are all being interviewed after the ceremony, and they’re giving this nervous laughter about the red flags Mann is giving off. They’re laughing and saying things like “Wow, he really is a film maker if he’s being this demanding already!”

Now, of course, we have to remember that this is a reality show. It is just as likely that they selected him precisely because he is trouble, and trouble makes for interesting television. However, that doesn’t make this first episode of Project Greenlight any less infuriating. Look again at the cast photo at the top of this post. Be blinded by its near-perfect whiteness. Then wonder how Damon and Co can be so clueless as to what the problem is, and what they’re in a unique position to fix.

Just because “that’s the way it is” doesn’t mean that’s the way it has to stay. And my God, if the entire judges’ panel had reservations about this guy’s sensibility and personality, why are they willing to let that slide? Sure, he had a great short film, but so did a lot of the other contestants, and many of those other contestants were also nice and able to collaborate with others, which is key in film making.

Since every season of the show has had a different focus, I vote that Project Greenlight 5 be open exclusively to women and people of color. Because Project Greenlight is about access, and it’s about time that it puts its money where its mouth is and stops giving access to the same people over and over. And please, Matt Damon, stop with the Damonsplaining and listen to someone telling you about their experience for once:

Matt Damon is patiently explaining to a guy’s foot how to fungus. — GAIL SIMONE (@GailSimone) September 14, 2015