Stacey Abrams Loves Supernatural and the Show Loves Her Right Back

As if she could be more awesome 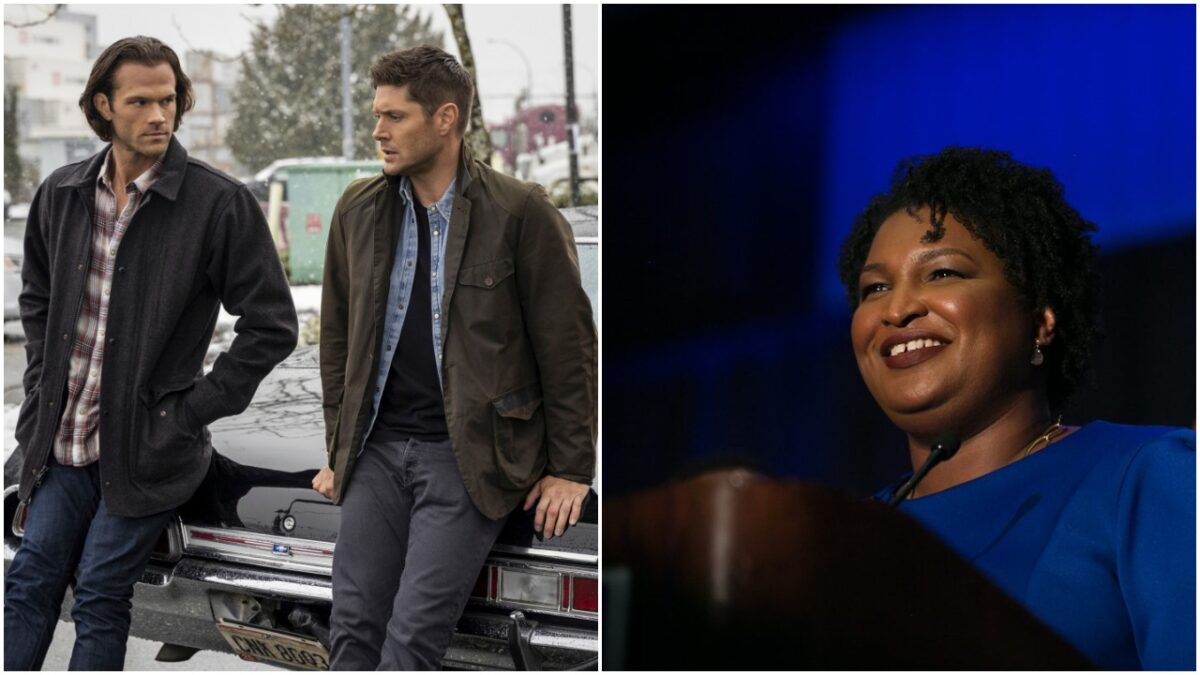 There are a lot of awesome politicians that happily identify as Supernatural fans. During the election, we saw Cory Booker, MJ Hegar, Andrew Yang, and more join with the Supernatural family to raise awareness about voting and democracy But it wasn’t until after the election was over that the cast and crew realized they had another truly amazing leader among the ranks of the fandom: Stacey Abrams.

Now. We all know Stacey Abrams is amazing. She’s changed the political landscape of one of the most voter-suppressed states in the union and she’s a romance novelist! She also got Twitter back in the discourse with her take on the Buffy/Spike vs. Buffy/Angel debate. (The correct answer turns out to be Buffy/Willow.).But Abrams’ longstanding love of Supernatural was actually on the record a while ago, it just passed under the radar among all the other awesomeness.

In a July 2018 profile for Time, it was quietly mentioned that Supernatural is Abrams’ favorite show:

The next morning, Abrams skips church to sleep in and catch up on a favorite show, Supernatural. Its warrior angels and demons “create some very interesting theological questions,” she muses, settling onto her cream-colored sofa to talk about the campaign.

That profile was entitled “Stacey Abrams has a plan to turn Georgia blue” and a little over two years later, she did just that. And that one tidbit from the profile began to circulate on the night that Georgia went blue and Destiel went canon.

Supernatural creator Eric Kripke was quick to welcome Abrams to the family.

Hi @staceyabrams. I’m the creator of #Supernatural & we’re honored you dig the show. YOU SAVED THE WORLD FOR REAL. If you want ANYTHING #SPN, reach out, its the least we could do. Thanks for all you do, the #SPNFamily is proud to have you! @JensenAckles @jarpad @mishacollins pic.twitter.com/TpbR5GR1pR

Some members of the cast were pretty thrilled as well, including one angel who’s looking for a new gig.

Also, @staceyabrams, if you need an unpaid intern to pick up your dry cleaning or clean the grout in your bathroom tiles, I am interested in applying for the position. You are a hero to all of us. https://t.co/RxqbLAIIsx

It took Abrams a few days to reply, which is understandable since she’s been very busy continuing to save democracy. But it was worth the wait. Just like watching those final episodes of the show will be for her:

Hello! I’m saving up the final episodes for an epic binge & to delay the inevitable sadness. Y’all came into my life during the 2018 Gov primary & never left. Smart, funny, irreverent & so terrifically kind in its forgiveness of mistakes, hubris + human error. #SPNFamilyForever

This is … exactly why I love Supernatural, and it’s so cool to see someone so amazing saying it. This is a long-running series about ordinary people defeating massive evil against insurmountable odds … which sounds pretty familiar coming out of this election. No wonder so many politicians have turned out to be Winchester fans.

Speaking for Bobby Singer, as I so often do, “You go, girl!”

As Supernatural gears up for the final ride this Thursday, it’s good to know that the ways this show has touched people—from the newest fans to the halls of power—will endure forever.