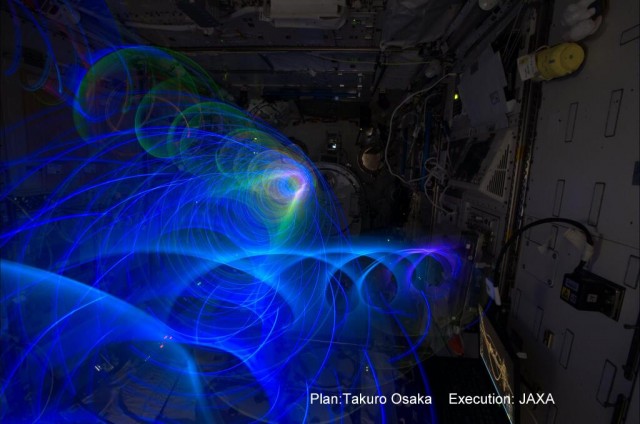 Right now on the International Space Station there is a machine that makes crazy light spirals like the one pictured above.

This image was tweeted today by the ISS Japanese Commander Koichi Wakata:

Dont’ worry if you don’t read Japanese, he also tweeted a photo with an English caption a few minutes later:

Another photo of “Spiral Top” developed by Dr.Takuro Osaka. Potential of what zero-gravity can create is unlimited! pic.twitter.com/C6TXzS628w

The spirals are the product of the “Spiral Top,” a device with mounted LEDs that, as the name suggests, spins like a top, allowing for beautifully light-painted images like this one. Wakata also tweeted a photo of the device itself while it was stationary and not making beautiful light spirals.

This “Spiral Top” with LEDs makes an amazing art in zero-gravity. See photos of my next two tweets.  pic.twitter.com/EvU25l3Il8

You can see more photos of the Spiral Top in action on Dr. Takuro Osaka’s site.