Astronauts are better at photography than you, but space is kind of an unfair advantage. 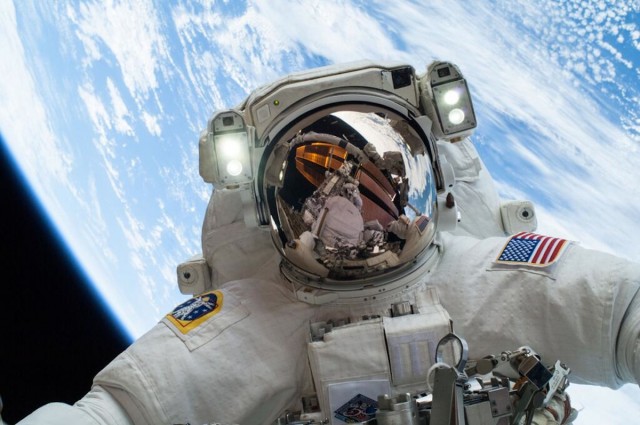 Thanks to the Internet, it’s now super easy for everyone to see what the Earth looks like from an astronaut’s point of view. (Mostly it looks frighteningly far away, but also beautiful.) ISS astronauts have been working on the outside of the station a lot recently, so we’ve got the best of their amazing pictures for you.

Hanging out on Christmas Eve. pic.twitter.com/MvELw8tzRe

This. This is why you should be following astronauts on Twitter. How did you spend your Christmas Eve? Probably not hurtling through space making a full orbit of the Earth every 90 minutes like Rick Mastracchio, that’s for sure.

Just look at the smile on his face as he fixes the ISS’s cooling system. It looks more like he’s waiting to be served at some kind of alien space-bar.

My Russian crewmates are working outside my window installing a telescope on station. pic.twitter.com/RWa3H2SLrC

And while we’re looking at astronaut Rick Mastracchio’s Twitter, here’s a shot he took today while a pair of cosmonauts (Commander Oleg Kotov and Flight Engineer Sergey Ryazanskiy) installed some new imaging equipment on the space station. What? There are just two guys floating outside of the window setting up some new space equipment. No big deal. How’s your Instagram of your lunch looking? Exciting?

Astronaut Mike Hopkins snapped this space-selfie on the Christmas Eve coolant-fix spacewalk with Mastracchio. As we’ve discussed before, space-selfies are the best kind of selfies. Also, why is space not a school photo background choice? It’s way better than lasers or bookcases, hands down.

View of Ryazanskiy from Kotov’s helmet cam as they connect cables for camera system during #ISS spacewalk. pic.twitter.com/Ti2AueaVj8

A few of us at the Geekosystem offices have worked in tech support and been tasked with setting up cameras and the like, but doing it in space seems like turning it into some kind of extreme tech support sport.

Pic of @AstroRM during yesterday’s spacewalk. You can see me reflected in his helmet on the robotic arm. Sweet ride! pic.twitter.com/PvezT8qnex — Mike Hopkins (@AstroIllini) December 25, 2013

And one more of Mastracchio hard at work on the repairs. Wait, there are no stars in the background? Shut it down. This is obviously fake. Come on, guys. That’s the same mistake they made on the moon landing. The NASA budget cuts must be worse than we thought, everyone.