No Ifs, No Butts: Spider-Woman and the Comic Community’s Problem with Minority Readers 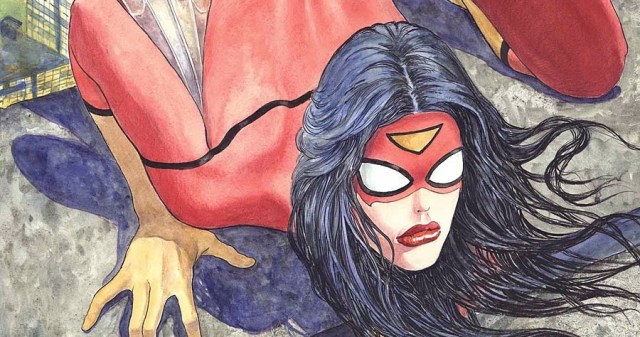 Sometimes it’s easy to see the potential of an iconic image from a first glance. War photography, Marilyn Monroe on a subway grate, Doge—that kind of stuff. Did I see that potential when I first saw Milo Manara’s variant Spider-Woman cover? No, I really just thought her butt looked weird. But then I didn’t yet know of Manara’s prolific career in erotic illustration that undeniably complicates the debate. I couldn’t possibly foresee becoming a bystander to Marvel creator Dan Slott’s incredibly problematic defence of the cover. And perhaps we’re all yet to realise how it in fact epitomises the very real issues facing minority readers in the wider comic book community.

In case you haven’t been closely following the controversy of Spider-Woman’s butt, allow me to review. At this year’s San Diego Comic-Con, at a panel called “Women of Marvel,” the publisher announced a new ongoing Spider-Woman series. The series, part of Marvel’s “Characters and Creators” publishing initiative that “aims to speak directly to… women and girls,” joins nine other female-led series published by Marvel. According to company’s Editor-in-Chief, Axel Alonso, these superheroines “are not the big-breasted, scantily clad women that perhaps have become the comic-book cliché” but are “defined by many things—least of all their looks.”

Comic books fans who sought to defend the cover quickly began to lean on a number of the more predictable arguments used to defend overtly sexualised imagery, such as the classic “that’s just the way women look in comics.” More worrying was the tone deafness displayed by industry creators to the problematic depiction of women in content actively marketed to women. Dan Slott, stalwart Marvel creator and writer of both The Amazing Spider-Man and Silver Surfer, argued that those expressing concern for the cover hadn’t necessarily spoken out against Manara’s previous work, attempting to suggest that this was very much business as usual. Marvel’s Senior Vice President of Publishing, Tom Brevoort, argued that while every reader has the right not to like something, the Spider-Woman cover is actually “far less exploitative” than some of Manara’s previous work for the company. Both failed to understand that the hiring of Manara to work on a series directly aimed at women was contextually very different to Manara’s previous work for series aimed at all kinds of readers.

Not quite finished, Slott then accused “gossip sites” such as The Mary Sue for circulating the image with the sole intention of “trying to draw up false ‘controversy’” and critiqued concerned fans for discussing it on social media. Not only do those accusations attempt to pass the blame from those in editorial who are actually responsible, they also attempt to smokescreen the worrying culture of marginalisation at Marvel that allowed this to happen. The commissioning of this cover required someone in Marvel’s editorial department to actively make this decision, to align Spider-Woman with the eroticised female figure that pervades both Manara’s work and wider culture. That editor will have some degree of involvement with the Spider-Woman series and the wider promotion of superheroine books at Marvel, and that’s incredibly worrying for the company’s entire female-focused line.

The whole affair has left me uncertain as to where minority fans fit into the wider comic community today, as evidenced by yet another backlash against anyone that doesn’t blindly subscribe to the “right” way of portraying minority characters. More problematically, how can we as minority comic books fans ever objectively critique content that has seemingly been produced and marketed for us specifically without being utterly dismissed by the “mainstream” community? How did the hiring of an incredibly androcentric erotic illustrator for a series aimed at female readers manage to escalate to a stage where one of Marvel’s most established writers was calling legitimately concerned fans “social justice warrior[s]” and asking us why we were even surprised by the situation?

Both Slott and Brevoort’s attempts to legitimise the use of Manara’s work through precedent are problematic for their disregard of both the cover’s context and of the changing demographics of comic book readers. Less than three years ago Marvel didn’t have any female-led ongoing series, and its readership undoubtedly reflected that creative direction. Now Marvel’s aim to encourage more women to read comics appears to have succeeded through a wide variety of different kinds of stories. The problem now is that many fans and creators act as if the representation and positive portrayal of minority characters aren’t now editorial priorities and appear reluctant to change. In all of these arguments defending the Manara cover, I only really hear one question: “Why do things have to change just because of you?”

I believe that it’s from this perspective that the “mainstream” comic book community appears to view the majority of the voiced concerns from minority readers—female readers, queer readers, readers of colour. From this viewpoint, fan criticisms of the Manara cover aren’t perceived as the vocalisation of the justified fear of cultural exclusion, erasure, or ignorance within comics. They aren’t recognised as cultural border skirmishes with social identity that go far beyond aesthetics to issues of objectification, sexual agency, and the marginalising of different voices. They aren’t understood as what they really are: a fellow fan saying, “This doesn’t make me feel comfortable. This does not feel like the character as I understand or relate to them.”

Instead, they’re perceived as nothing more than the inconvenience of a little sister banging on the “no girls allowed” sign of her brother’s boys-only clubhouse as she demands to be included in their grownup games. She may be allowed to play with his toys when he’s grown tired of them, but his action figures can’t wear make-up or ride Barbie’s dream horse; they have to subscribe to patriarchal understandings of gender roles. These are explicitly male-orientated toys that are only temporarily co-opted by minority readers to whom they don’t truly belong.

This reality is difficult to accept but nonetheless true: minority readers can only participate as an accepted part of the comic book community if they don’t object to the cultural status quo, if they understand “how things work in comics,” if they don’t try to rock the boat. It’s that unspoken ultimatum which powers this particular debate, which continues to empower “proper” comic fans online, which perpetuates the feeling that many geek cultural spaces aren’t accessible, welcoming, or safe for minority comic fans.

Criticism of “the ways comics are” by the social groups typically not accepted by wider geek discourses is derisively viewed as “social justice warrior-ing” and those groups trying to ruin the establishment’s clubhouse. The very nature of this clubhouse mentality is what perpetuates the cultural friction between conventional and alternative readers. “True” fans, such as Slott, somehow don’t appreciate that the way comics historically were—the clubhouse and all its boys-only rules— is not an egalitarian space for all comic readers. Instead, it is a carefully constructed culture that speaks to the specific sensibilities, anxieties, and fantasies of the archetypal heterosexual, male reader and principally excludes all others.

That distinction between mainstream and minority readers even informs the way that we read and the way we identify with characters. Our relationship with comics is intrinsically different to that of straight male readers, because we usually have to specifically seek out titles that “speak” to our own life experiences—relevant to our own sensibilities, anxieties, and fantasies—amidst all the male power fantasies and reductive tropes. It’s why the Carol Corps have become such a powerful phenomenon within the community; her fans appreciate Captain Marvel as a rare reflection of themselves, their experiences, and their desire, and so her role within the fandom has seen a meteoric rise. When you can see your reflection in everything you look at you become far less desperate to find it, far less desperate to hold onto it when you do.

When Marvel announced a Spider-Woman ongoing series, fans of both Jessica Drew and minority heroes became excited for the potential to see themselves represented once again. Instead, Marvel proudly revealed the Manara variant, and minority readers instantly realised “that isn’t me.” We became disheartened because this isn’t just another case of having to dig through all the stuff in comics that isn’t necessarily “for us.” This was meant to be for us. It was aimed at us. When content is marketed directly towards you but the creative direction is so completely wrong, it’s frustrating. When “proper” fans then try to tell you that you’ve no right to be frustrated, it’s infuriating.

I don’t expect the average comic book reader to necessarily care about the Spider-Woman variant cover, but I will challenge anyone who tells me that I don’t have the right to care about it myself (even if they do write Spider-Man). As comic book readers, we have just as much right to say that an editorial direction strongly contradicts with how we relate to a character, particularly when it is explicitly being marketed towards us. It’s not spoiling anyone’s fun and it’s not “social justice warrior-ing.” It’s capitalism in its most basic form.

I don’t want to push my way into the boys-only clubhouse and enforce my perception of comics onto anyone, but it is time that minority readers are given a recognised and legitimate voice of our own within the comic community. It is time we be acknowledged as a real-life group of readers that exist without the alleged clickbait rage and charges of “feminazism.” We represent both a significant revenue stream and a diverse and passionate range of fans. Marvel’s editorial push towards promoting different kinds of stories to different kinds of readers—including completely new ones—has undeniably diversified the kinds of people actively involved in the comic community today. What matters now is whether the clubhouse doors open to us. Because we’re damn sure not going anywhere.

Adam Sorice is a literate graduate turned grown-up who writes about pop culture when he’s not describing himself in the third person. His writing engages with all the key feminist icons of our time: Lady Gaga, Sailor Moon, Elsa from Frozen and, naturally, Thor. To read more of his work, check out his blog or follow him on Twitter.